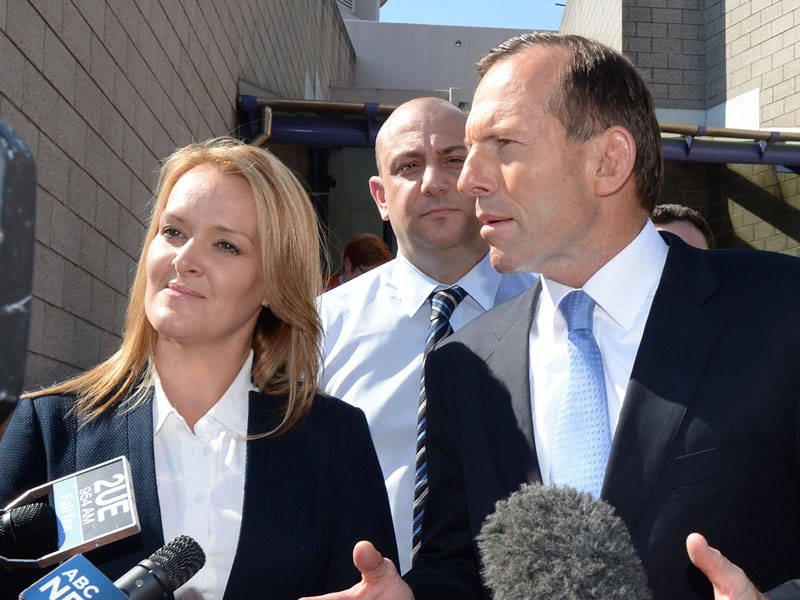 “Fiona Scott only got in because Tony Abbott came out here on many visits and he made the ‘sex appeal’ comment,” Marcus Cornish, a local Liberal Party member and independent councillor, told the ABC’s 7.30.

“That got her across the line and she’s turned around and stabbed him in the back, as many have done in the Liberal Party in New South Wales.”

• Fifteen times politicians’ mouths let them down
• Scott Morrison snaps at Barrie Cassidy on television
• Why we aren’t laughing at your house prices joke, PM

Mr Abbott visited Lindsay to endorse Ms Scott during the 2013 federal election campaign, saying she was “young, feisty” and had “sex appeal”.

The Liberal Party won the seat but with a smaller margin then it had hoped for – just 3 per cent.

Mr Cornish is currently suspended from the party for previously distributing an email criticising Ms Scott.

Ms Scott would not comment on his allegation, except to say it was speculation.

“I’ve never said which way I voted, so you can add to speculation. But that’s your call as a journalist.”

Ms Scott is also suffering a backlash from volunteers connected with the former prime minister, who have complained about helping campaign in Lindsay because they believe she did not then back him in the leadership battle.

At the last election Mr Abbott campaigned hard to secure the election of Ms Scott. providing cash and dozens of volunteers.

But the support came to an end after September’s leadership ballot, which saw Mr Turnbull installed as prime minister.

7.30 has obtained a Liberal Party memo from NSW state director Chris Stone, showing resources from Mr Abbott’s seat of Warringah will now be directed to Karen McNamara in Dobell.

Ms McNamara was a key Abbott backer in the leadership spill.

David Burchell, a senior politics lecturer at Western Sydney University, said the stoush would not help the Liberal Party in the seat.

“The good folks in Warringah on the north side of Sydney, the more affluent side of Sydney, are refusing to go there because they’re upset about the local member Fiona Scott’s support of Malcolm Turnbull over Tony Abbott in the leadership spill a while back,” Dr Burchell told 7.30.

“That strikes me as being a very silly thing for them to do.”

Ms Scott has downplayed the support she received from outside the electorate, describing it as minimal.

“My campaign team this time, my campaign team last time, are local people. We were out at the train station this morning, there were seven of us, every single one of those people live in the Lindsay electorate,” she told 7.30.

7.30 has learned volunteers on Lindsay will now be supplied from Local Government Minister Paul Fletcher’s north shore electorate of Bradfield.

Dr Burchell said the divisions were bringing a difficult issue for the party to the foreground.

“It certainly won’t do the sitting member any good,” he said.

“I think it also brings to the fore an issue that the Liberal Party would’ve preferred to keep quiet – that even though they can poll well in the seat, the party doesn’t have strong roots in the seat.”

Marcus Cornish told 7.30 that the split in Lindsay was part of a wider problem within the Liberal Party.

“I’d dearly love to see change in the Liberal Party, I’d like to see the factions loosen their grip,” he said.

“I’d like to see plebiscites come in and make the party democratic again.

“Sadly it’s gone the same way as Labor, so people will have a very difficult choice at the next election.

“I’d like to say that any conservatives in the Liberal Party, please stay there, the party needs you, and stop the party going the wrong way for the sake of the people of Australia.”

“I don’t think the party has a question with factionalism, but of course Mr Cornish can make whatever analogies he would like to make,” she said.

“Mr Cornish obviously has his own views. That’s a matter for Mr Cornish.”