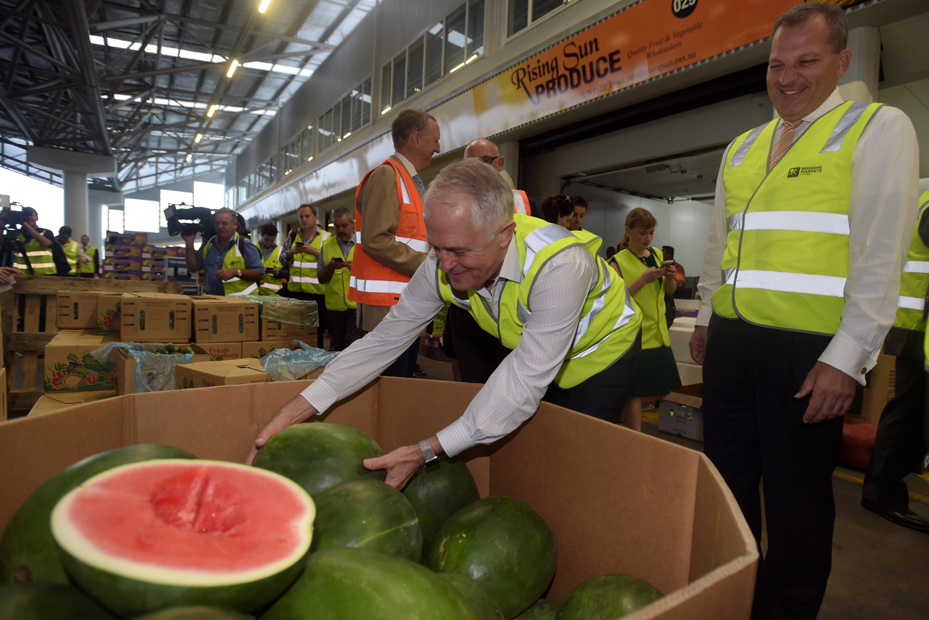 They took a snap together anyway.

• Election 2016: PM calls historic vote for July 2
• The seats that change government
• Why we shouldn’t care what politicians wear

The Brisbane Markets wholesaler promised the then-shadow minister he’d get him to sign the photo if he ever made it to the top job.

On Monday, Mr Hunter fronted up to work, photo in hand to meet the Prime Minister.

“He signed it,” Mr Hunter told AAP at the markets – Mr Turnbull’s first stop of the election campaign.

“He remembered too, which I was impressed with.”

At the markets in the seat of Moreton, held by Labor’s Graham Perrett, he inspected the produce and chomped on a piece of watermelon.

He promised the many small business owners lining up to greet him his government was backing them.

Salesman Ethan Kelly, 24, was impressed the prime minister took the time to meet the workers and enjoyed his banana-seller yarn.

“Although it was probably before I was born to be honest,” he told AAP.

Mr Turnbull was well received during his hour with the fruit and vegetable sellers, although one business owner warned the prime minister he had to start paying some bills.

“They’re just wasting too much. Let’s pay the bills first.”

He fears “it’s a certainty” that Australia will end up with the debt levels of Greece.

Mr Turnbull, who is known for his social media presence, took at least three selfies with staff, including one with China Chaudhari, who says it would be posted straight away.

Some wholesalers wanted to talk about the free trade deal with China, optimistic it would open up new markets for sellers but potentially at the detriment of Australian consumers.

Hamish Montague said fruit and vegetables were now sold to China indirectly through Hong Kong in the “grey trade”, and the trade deal would allow direct exports.

“The growers are going to have a great impact because they’re going to get higher prices,” he told AAP.

“But that would be potentially bad for consumers.”

The Prime Minister will visit the Liberal seats of Petrie and Bonner later on Monday.