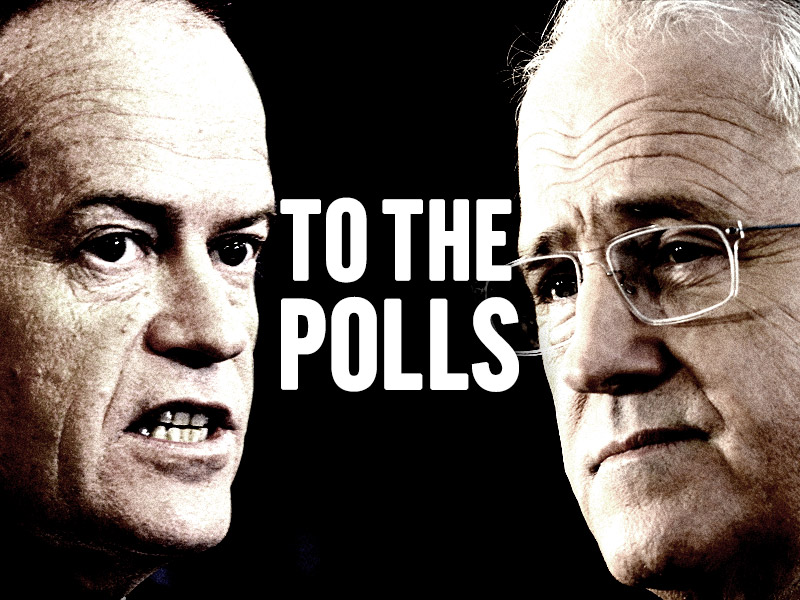 Malcolm Turnbull goes into this election with the easier job. Most voters expect the Prime Minister to win, which is usually a pretty good guide to who will actually win.

They have pretty good reason to think that, too: Australians have not dumped a first-term government since James Scullin’s Labor lost in 1931. We like second chances in this country.

Mr Turnbull has therefore decided his main job isn’t giving voters a reason to like him: it’s making sure voters don’t have a reason to chuck him out.

How Bill Shorten plans to bring down the Coalition

Beneath the slogans that you’ll hear ad nauseum lies a single calming message: this is a government you can depend on, unexciting, slow-and-steady-as-she-goes.

We’ve just begun (remember, this is the Turnbull government, not an Abbott continuation), so give us the chance to carry on the good work, won’t you?

The flipside of this is highlighting the risk that Labor poses to the country.

What Mr Turnbull wants the election to be about: The economy. Across the world, conservative parties are rated by voters as better economic managers. That’s true in Australia too, and the PM wants to focus the hive mind of the electorate on that issue alone.

On Thursday he put it like this: “The question will be: who do you trust to ensure that our economy transitions successfully from the mining-construction boom to one where we take advantage of the great opportunities of the 21st century?”

This theme will be accompanied by constant assertions that Labor loves higher taxes and has a terrible record on debt, and that only the Coalition is capable of ensuring Australia “lives within its means”.

Main policy strengths (so far): The company tax cuts allow the government to emphasise its “jobs and growth” budget strategy. Tax cuts for those earning over $80,000 add to its “party of lower taxes” shtick.

Main policy weaknesses: Health policy. Changes to pathology payments and a budget decision to freeze Medicare rebates have huge potential to cost the government votes. At a national media level this might go largely unnoticed, but on the ground it could be poison. The fact that tax cuts skip most of the population might hurt too.

What Mr Turnbull wants you to think about Mr Turnbull: A successful businessman who understands the economy, gets how businesses work, and believes in the power of aspiration.

What Labor wants you to think about Mr Turnbull: A rich man living in a rich man’s bubble, who doesn’t understand how ordinary families live. A disappointment as Prime Minister, he’s not the messiah you thought he was – he’s just Tony Abbott in a better suit.

Going negative: Voters love to say that they hate negative advertising, but every political professional knows the sad truth of the matter: attack ads work. Boats of asylum seekers have largely stopped coming towards Australia, but they’ll be a big feature of the campaign. Expect to be told – over and over again – that Labor can’t be trusted to keep the boats stopped. I’d also expect reminders of Bill Shorten’s union ties, perhaps with some pics of disgraced unionists thrown in, and his connections to the Rudd-Gillard challenges.

Secret power: Polling. The Crosby-Textor polling team has attained almost mythical status in Australia for being able to read the mood of the electorate with sophistication and then tailor messages accordingly.

Unknown: Former prime ministers can suck up a lot of oxygen on the campaign trail, as Julia Gillard discovered in 2013. How Tony Abbott behaves will dictate how smooth a ride Mr Turnbull gets.

Sean Kelly was an adviser to Kevin Rudd from 2009 then to Julia Gillard from 2010. He is on twitter @mrseankelly

Read his other columns for The New Daily here.

How Malcolm Turnbull plans to stay in power