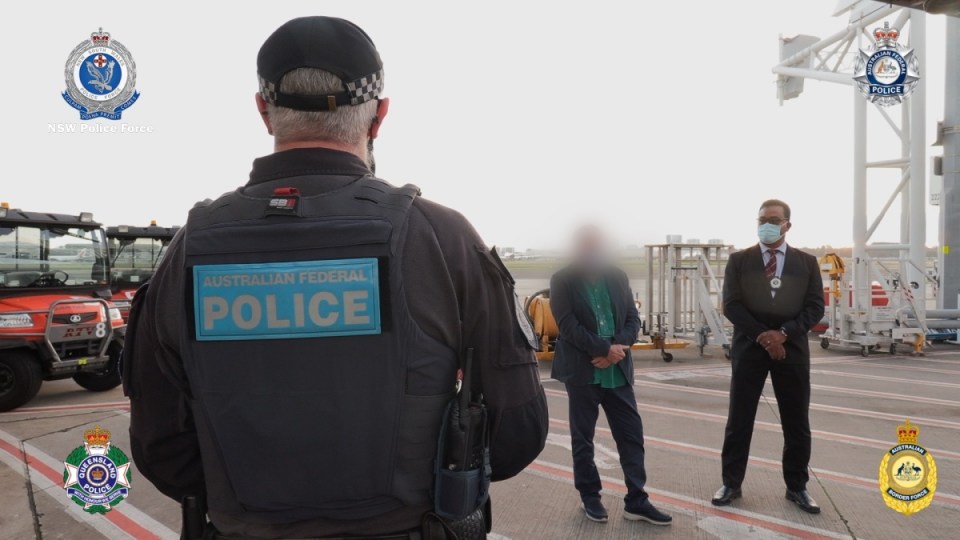 James Blee arrived in Sydney late on Friday, after being extradited from Queensland. Photo: NSW Police

A superyacht tour operator will face court in Sydney on Saturday after being extradited from Cairns over his suspected role in a cocaine haul worth more than $20 million found near a dead diver in Newcastle.

Foreign national James Blee was arrested on Wednesday on his way to Cairns airport, after he allegedly tried to flee the country.

A handcuffed Mr Blee was extradited to NSW on Friday, arriving at Sydney airport late in the day.

He was refused bail and will appear in Parramatta Local Court on Saturday.

It came as NSW Police released CCTV images of two people also sought in relation to the death of the diver found near bricks of cocaine at Newcastle port.

Detective Superintendent Robert Critchlow said the pair were likely in the Newcastle region between May 1-11.

One is a man described as South American in appearance, 178 centimetres tall and of an athletic build.

The other is a woman, who is described as thin, tanned, about 150-160 centimetres tall and with blonde or grey hair.

Detective Superintendent Critchlow said they both entered the country illegally via ship.

He also estimated that another 50 kilograms of cocaine had already hit the streets.

Police on Tuesday revealed the diver – identified as a foreign national – was found unconscious in the water at the Port of Newcastle and was unable to be revived.

The man was found near 54 kilograms of cocaine. It is believed he was trying to retrieve the drugs.

The diver had sophisticated equipment, including a “rebreather” apparatus that allows the user to breathe underwater without any telltale bubbles rising to the surface.

He also alluded to the transnational dimensions of the illicit shipment extending to neighbouring Indonesia.

Indonesian authorities on Sunday said four packages of cocaine weighing 180 kilograms, with a street value of more than $80 million, had been found near Java’s Merak Port after being dumped in the ocean.

“The logistics of this operation were huge with many moving parts and we’re also looking at Indonesia and what may have happened there,” Detective Superintendent Critchlow said.

Police have also docked a Marshall Islands-registered cargo ship, which was nearby at the time, after it arrived from Argentina on Sunday.

Authorities have searched the ship, investigating theories the drugs may have been thrown from the ship or attached to its hull, and the diver may have drowned while trying to retrieve them.

The investigation involves police from NSW, Queensland and the Northern Territory, as well as Australian Federal Police and Australian Border Force officials.

Lost at sea? Here’s a desalination unit that fits in a suitcase
Guard lied to dying Indigenous prisoner that a nurse had been called: Inquest
Today's Stories