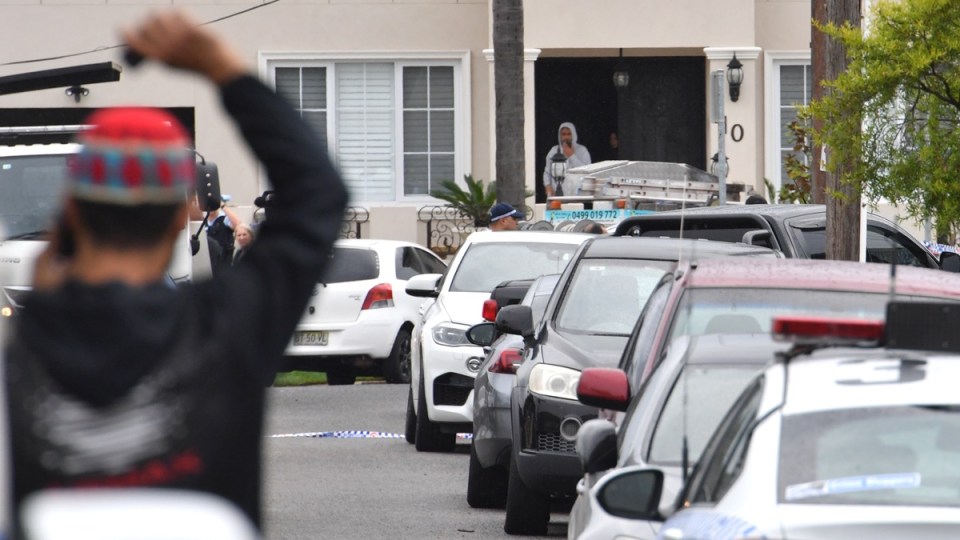 Police say it's a miracle only Mahmoud 'Brownie' Ahmad was killed when shots rang out on a Greenacre street.

Two men have been arrested after allegedly getting into a police chase on their way to the funeral of a Sydney underworld figure gunned down in a suburban street.

The pair, 36 and 35, were en route to the funeral of Mahmoud “Brownie” Ahmad in Lakemba on Saturday, when anti-gang squad police attempted to stop them for a random breath test.

Ahmad was shot dead at Greenacre in the city’s southwest on Wednesday night in what Homicide Squad Commander Danny Doherty described as a brazen and callous murder.

“The amount of people with Ahmad at the time … it’s an absolute miracle no one else got hit,” Detective Superintendent Doherty said on Thursday.

The hit appears to be the latest chapter in Sydney’s ongoing gang wars.

And it was Raptor officers again who tried to intercept the vehicle in Greenacre around 10.30 am on Saturday before the driver allegedly drove onto the median strip.

The two men ran from the vehicle and were chased on foot before being arrested in a nearby front yard, police say.

They allege they discovered 0.6 grams of methylamphetamine on the 35-year-old passenger and found another 25.7 grams inside the vehicle. Officers also found a bumbag containing 20.5 grams of cocaine in the area where the men were arrested.

The 36-year-old, an alleged disqualified driver from Mt Lewis, was charged with multiple drug supply and traffic offences.

The younger man is from Belmore and had been the subject of an outstanding arrest warrant, police say.

He is also accused of multiple drug supply offences.

Both were refused bail to appear in Liverpool Local Court on Sunday.

“We’ve arrested over 250 people, with more arrests last night, and people arrested on the way to the funeral getting done for serious drug supply after a police pursuit,” Chief Superintendent Darren Bennett told the ABC.

Police are redoubling efforts to prevent retaliatory actions between crime gangs, he said.

Organised crime in the crosshairs

On Friday, a 41-year-old man alleged to be the National Sergeant at Arms of the Comanchero outlaw motorcycle group, was charged with two counts of contravening a serious crime prevention order after failing to tell police he had changed his living arrangements while visiting NSW.

He will appear at Downing Centre Local Court in June.

“The execution of Mahmoud Ahmad at Greenacre was a disgraceful and intolerable act of public violence but this only strengthens our resolve to ensure police are well-equipped to arrest and charge those responsible,” he said.

“The message is simple: if you’re even remotely associated with organised crime, police are watching, they have leads, and they will act.”

A large amount of intelligence has been gathered on Ahmad’s murder, Supt Bennett said on Sunday.

“Preventing these types of events is an imperfect science and a challenging one at that.

“Ahmad was cautioned about the imminent threat to his life on multiple occasions but chose to ignore those warnings, with fatal consequences.”