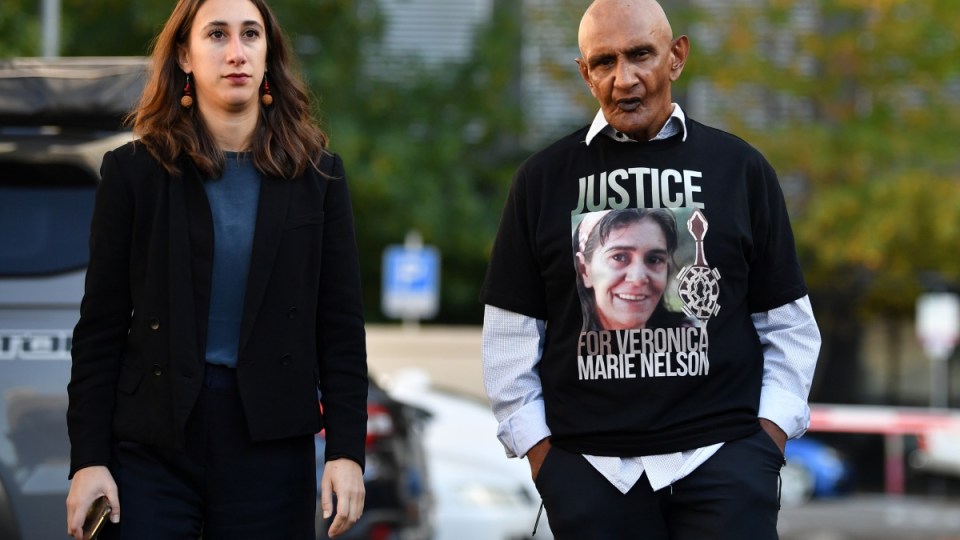 Percy Lovett (right), partner of Veronica Nelson, who died in a cell after screaming in pain and calling for help nine times. Photo: AAP

Tough new Victorian bail laws are catching up people in court hearings when they don’t need to be, an experienced barrister believes.

Peter Schumpeter was allocated Veronica Nelson’s case when she was due to appear in Melbourne Magistrates Court after her arrest in December 2019.

The court did not get to her case on December 30 so was held over until December 31 when she made her own bail application, which was refused.

The Indigenous woman died in a cell at the Dame Phyllis Frost Centre in the early hours of January 2, 2020 from an undiagnosed medical condition after screaming in pain and calling for help nine times.

Mr Schumpeter doesn’t believe he met or spoke to Veronica on December 30 but his notes show he contacted her regular lawyer Jill Prior and that her case was adjourned for a bail application the following day.

Veronica was required to show exceptional circumstances to justify a bail application, because she was charged with breaching bail.

She had failed to appear in court on shop stealing offences and was accused of having committed a further similar offence.

Mr Schumpeter told an inquest into Veronica’s death that, working at the “coalface”, he believed a number of people being brought before Melbourne’s Bail and Remand Court (BARC) should not be there.

“But the consequences weren’t properly foreseen.”

The number of arguments about the time a person might spend in custody exceeding a prison sentence they might receive suggest those people shouldn’t be there, he said.

He believed Veronica’s case for bail had merit and tried to arrange it so she could be assessed for a community bail program the following day.

‘High hurdles’ for bail to be granted

Tass Antos who was given a brief to represent Veronica on December 31 disagreed, telling the inquest he believed there were “high hurdles” for bail.

He couldn’t recall details of meeting Veronica but in an email to Ms Prior he called Veronica “aggressive and dismissive” and said her bail had “unsurprisingly” been denied.

Mr Antos brought up the possibility of him suggesting Veronica apply for bail herself, so as to preserve her right to have a represented bail application later.

The law requires new facts and circumstances before a second application can be made if a person was legally represented the first time.

“If it wasn’t resolvable or there was perhaps a high hurdle that couldn’t be met, that’s why the option is given to someone, or would have been given,” he said.

Ms Prior raised that practice when giving evidence on Wednesday.

Ms Prior was on leave when Veronica was charged.