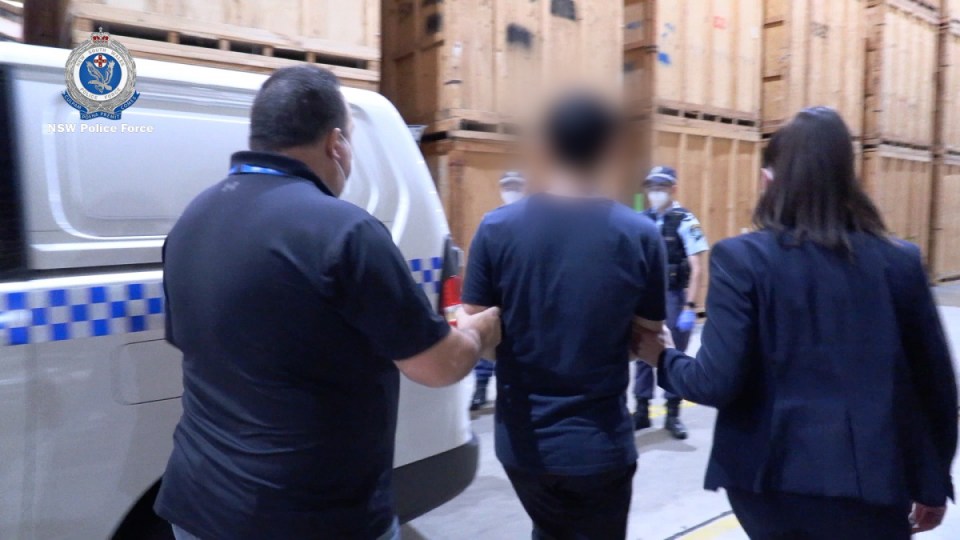 The man was arrested after police inquiries led them to a storage facility in Rosebery. Photo: NSW Police

A man accused of stealing 42,000 rapid tests and boxes of face masks has been bailed in Sydney after turning himself in following a police raid on storage units in the city’s south.

The supplies, worth at least $500,000, were uncovered in two Rosebery storage units on Wednesday afternoon about 24 hours after going missing from a Botany freight depot.

Images released by police on Thursday show dozens of boxes of the Chinese-made tests and KN95 face masks inside one of the units. However, police were not able to say whether all 42,000 of the tests have been recovered.

Zeshi Wu, 28, went to Mascot police station on Wednesday night and was charged with dishonestly obtaining property by deception.

He appeared in Central Local Court on Thursday, where he received bail.

Police allege he played a part in organising the theft.

It’s understood depot workers may have been tricked into allowing the tests to leave the facility with false documentation provided by someone impersonating a courier.

“There’s obviously some documentation [that] has had to be provided at that import facility, that documentation that has been provided is part of the investigation and will be before the court.”

The tests were privately imported, rather than the state-purchased tests bound for schools, aged care and vulnerable communities.

Superintendent Gorman said police allege the tests were to be sold on the street amid high demand and scarcity. There is concern it won’t be the last investigation into stolen rapid tests police will face.

“There is always those that will try and profit on the misery or the illnesses of others,” Superintendent Gorman said.

He said police would seek to release any seized tests back to their importer as quickly as possible after forensic examination, so they could reach their intended destination.

Australian National University emeritus criminology professor Roderic Broadhurst said a squeeze on supply created opportunities for criminal entrepreneurs, whose most difficult task was obtaining supply rather than distributing it.

“They’ve already got a contraband logistical arrangement, they may not even have to go to a great deal of elaboration” to offload products on the black market, Professor Broadhurst said.

“The golden rule is crime follows opportunity. When there’s a gap in the market to exploit, it will be [exploited] by somebody.”

Three men arrested at the storage unit on Wednesday were released from custody after being interviewed and providing further information to police.

The theft comes amid a nationwide shortage of the kits and some retailers charging exorbitant prices.

Australian Competition and Consumer Commission boss Rod Sims said the agency has received reports of RATs costing up to $500 for two tests through online marketplaces, and more than $70 each at convenience stores, service stations and independent supermarkets.

Despite wholesale RAT costs of a maximum of $11.45 a test, the consumer watchdog said retail prices for kits were often between $20-$30 – and much higher at smaller outlets.

The Therapeutic Goods Administration is also investigating businesses found breaking up packs of multiple RATs so each test can be sold individually at a higher price.

Kirstie Clements: The future of fashion is comfort, not whatever they’re wearing in Dune
Mourners hold vigil at Tweed Heads for murdered girl found in barrel
Today's Stories