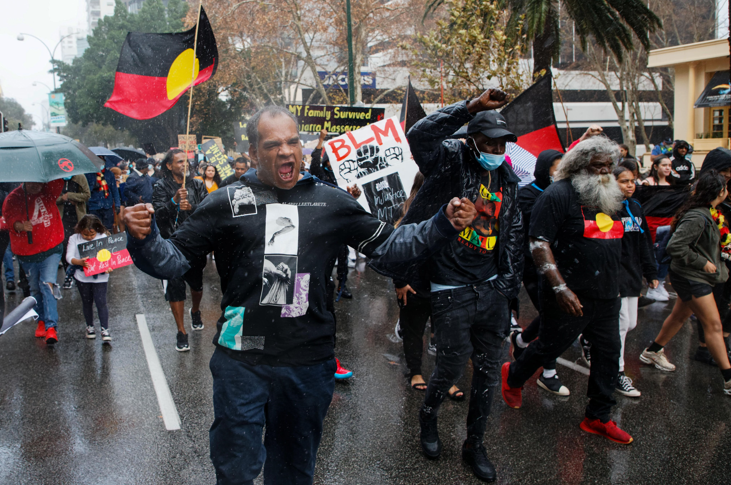 The Geraldton woman's death at the hands of police fuelled anger at Black Lives Matter protests in 2020. Photo: Getty

A police officer who shot dead an Indigenous woman carrying a knife on a suburban West Australian street has walked free after being acquitted of her murder.

The first-class constable faced a three-week trial in the WA Supreme Court over the September 2019 killing of the 29-year-old woman, known as ‘JC’ for cultural reasons, in the state’s Mid West.

After deliberating for three hours on Friday the jury found the officer, who cannot be named for legal reasons, not guilty of JC’s murder.

The accused officer wept in the dock as the jury also returned a not guilty verdict to the lesser charge of manslaughter.

JC, a mother-of-one, had experienced significant mental health and drug problems and recently been released from prison when she was shot dead by the accused from close range while surrounded by police vehicles in Geraldton.

The accused testified he had acted in self-defence, claiming JC had turned towards him and raised the knife before he pulled the trigger.

‘Shot her at point-blank’

Emotions ran high outside the court as JC’s loved ones, including her foster mother Anne Jones, expressed their devastation at the verdict.

Bernadette Clarke said her sister’s nine-year-old son had been left with no mother.

“The man shot her at point-blank. Left the family broken,” she said.

The accused was one of eight police officers who swarmed on the street where JC was seen carrying a large knife and a pair of scissors.

Five of the officers stayed in their cars, a sixth left his vehicle unarmed and attempted to speak to JC, and another drew his Taser but did not activate it.

The court heard the accused had got out of his vehicle, drawn his loaded firearm and run towards JC before firing a single shot at her abdomen from close range.

Other officers gave evidence JC had ignored repeated requests to drop the knife.

Defence lawyer Linda Black, who was escorted from the WA District Court building by police, said justice had been done.

“Very sadly, a young lady lost her life and (the officer) has had no opportunity to be able to express his sorrow for that,” she told reporters.

“He would like to do that today, to say how sad he is that by doing what he needed to do to preserve peace, it meant someone lost their life.”

Prosecutors had argued CCTV footage of the shooting, taken from a home about 65 metres away, showed JC did not move towards the officers.

Given the accused man’s extensive training, the number of officers present and the other available weapons, the shooting was “wholly unnecessary”, Director of Public Prosecutions Amanda Forrester SC said during the trial.

Ms Black argued her client was a “brave and careful officer” who had acted correctly by drawing his gun, rather than a Taser, when confronting a person armed with a knife.

She said the officer had never previously fired his gun while on duty and had less than a second to decide whether to pull the trigger given the close proximity.

The trial heard JC had battled serious substance abuse issues and did not have custody of her young son, which was a source of distress.

Ten days prior to her death, she had been hospitalised after calling triple zero and saying she was going to kill herself.

Family supporter and Noongar woman Megan Krakouer said there was still “no equality” for Indigenous people, 30 years after the Royal Commission into Aboriginal Deaths in Custody.

“This is what we have to deal with in the state of Western Australia. This happens far too many times and it hurts, and it’s wrong,” she said.

“No conviction … and you wonder why Aboriginal people are so angry and disillusioned with the police and the system.”