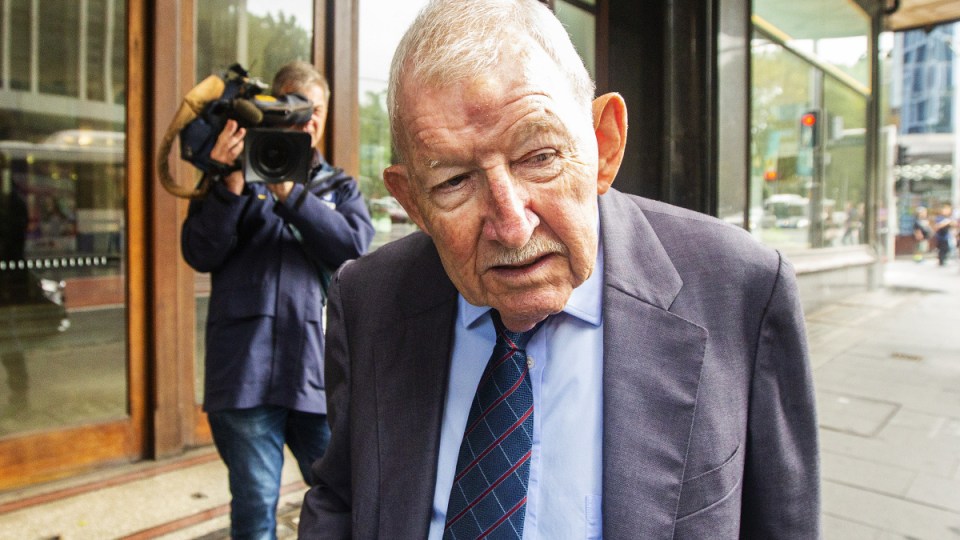 The 84-year-old former high-profile corporate raider, who’s admitted having a life-long obsession with young girls, was arrested at Sydney airport in 2019.

He pleaded guilty to three counts of possessing child abuse material found on devices in his airport luggage and at his home in Sydney’s harbourside Point Piper.

Brierley, who once chaired one of Australia’s most valuable public companies and was knighted in New Zealand, was stripped of his knighthood and scrubbed from a building in his old school after he pleaded guilty in April.

In the NSW District Court on Thursday, Judge Sarah Huggett found a sentence of imprisonment was required, rejecting a defence submission that a community penalty would be appropriate.

She jailed him for 14 months with a non-parole period of seven months which would expire on May 13, 2022.

Brierley possessed more than 40,000 images, many being duplicate images, of clothed prepubescent girls in sexually suggestive poses, as well as two sexually explicit stories and a sexually explicit image of a naked girl.

The judge concluded that a community corrections order sentence would be “manifestly inadequate”.

She noted the vast number of images, the many victims involved, the long-term possession of the material and his motivation being the sexual interest in girls.

“The offender’s fall from grace has been radical,” she said.

The successful businessman was of previous good character and had made a significant contribution to charitable and other community works.

He rose to prominence in the 1970s with his eponymous company Brierley Investments Ltd. It started with little capital but developed into an Australian-New Zealand conglomerate with investments in businesses around the world.

“I accept he has demonstrated he is contrite and remorseful and he has accepted responsibility and acknowledged the harm brought about by his offending,” Judge Huggett said.

But she rejected Brierley’s contention that he was never aware the images were against the law, regarding them as ordinary pictures of dressed girls.

“The fact remains the offender was in possession of child abuse material because of his longstanding obsession with young girls and such material provided sexual gratification.”

The multimillionaire had described his interest as being “in very soft pornography”.

After his arrest he said he had the images “because they looked interesting” and had viewed some the night before “for recreation”.

Brierley, who had large collection of many items, including newspaper cuttings and stamps, had been diagnosed by one medical expert as having a hoarding disorder.

But the judge found this was not a mitigating factor for his possession of the vast number of images.

She also accepted he had a paedophilic disorder that explained his behaviour, but found he had done nothing to address the long-term issue.