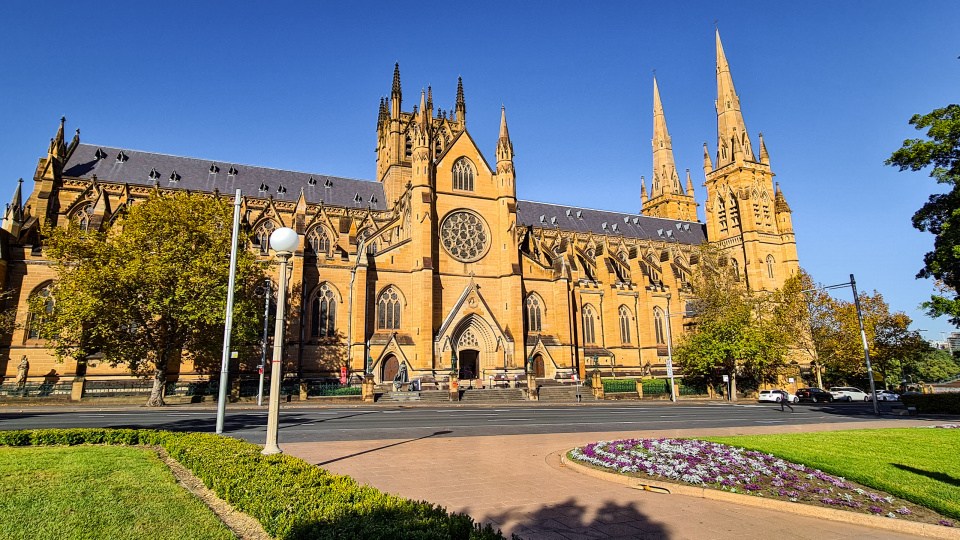 A radicalised ISIS member who had plans to target Sydney's St Mary's Cathedral has been jailed. Photo: Getty

A radicalised Islamic State member who’d discussed establishing a local insurgency and which Australian landmarks to target did a lot of talking but posed no direct local threat, a judge has found.

Greenacre man Isaac El Matari smiled and held his hands to his face as he was jailed on Monday for at least five-and-a-half years for three terrorism-related offences.

The 22-year-old was arrested in July 2019, having been closely monitored on his return from Lebanon, where he served prison time for trying to physically join Islamic State in Syria.

In Australia, El Matari was recorded rehearsing a speech, visiting a hunting and tactical store and discussing how publicity for his cause could be enhanced through attacking certain locations.

“I know how to convey a political message, I know what targets will make people scared,” he told an associate.

He also discussed the supposed presence of one thousand IS followers in Australia and about sending followers to Lebanon to be trained.

However, El Matari had also lamented he couldn’t find any support locally for his plans and described locally based IS supporters as “cowards”.

Part of his plans involved targeting Sydney’s St Mary’s Cathedral and the American embassy and conquering a rural town about the size of Orange.

However, his offending was on the lower end of the crime of doing an act in preparation and planning for a terrorist act in Australia, the NSW Supreme Court found on Monday.

“He did a lot of talking and took little action,” Justice Peter Garling said.

“He had no weapons … he had no followers, he had not persuaded anyone to his cause in Australia.”

El Matari’s attention later turned to joining the mujahideen in Afghanistan, getting a visa to travel to neighbouring Pakistan.

“Even this plan was poorly formulated,” Justice Garling said, noting the offender’s lack of contacts to hostile forces in Afghanistan.

That crime was about the mid range for such foreign incursion offences, the judge found.

Medical reports showed the offending had occurred on a background of social isolation and mental health problems, including post-traumatic stress disorder.

The PTSD was a result of being tortured in Lebanon’s notorious Roumieh prison, the court was told.

But he was unpersuaded by an account of El Matari’s departure from his extremist views to a mainstream adherence of Islam, given the offender declined to testify on oath.

He remained a high risk of reoffending and would remain so at least until he completed interventional programs in the jail system, the judge found.

Meanwhile, his rehabilitation prospects were rated as “slight”.

El Matari’s sentence was backdated to his arrest and reduced by 25 per cent for his early pleas of guilty.

It also took into account his admission that he’d been a member of IS between January and September 2019.

He will be aged 25 when eligible for parole in January 2025.