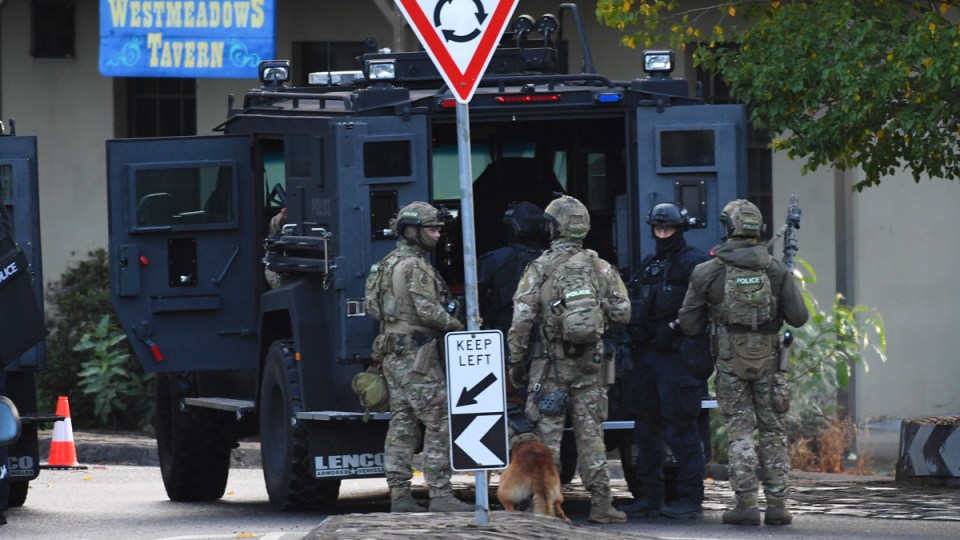 Police outside the Westmeadows pub during the siege that followed the robbery. Photo: AAP

A double murderer who went on to rob a Melbourne pub armed with a sawn-off shotgun and force its petrified manager into a cupboard has been jailed for more than a decade.

Both men were armed and hid in a wall cavity at the pub for 12 hours to dodge police as they searched for the pair.

Lindrea faced the Victorian County Court on Monday and was jailed for a total of 11 years and six months.

He had pleaded guilty to armed robbery, false imprisonment and possessing a weapon while being a prohibited person.

Lindrea and the other man were dropped off at the Westmeadows pub about 3am and entered through the roof by removing a portion of the corrugated iron panels.

They waited nearly two hours before the venue’s assistant manager, a woman who cannot be named, arrived at 4.45am to turn the lights on.

“Get on the ground,” the two balaclava-clad men yelled at her.

With their guns pointed about 15 centimetres from her face, they directed the woman to open up various ATMs and safes at the pub, and stuffed the cash into a green duffel bag.

A cleaner called police after spotting the armed robbers, but Lindrea managed to polish off a Jack Daniels from the bar fridge before disappearing with his associate.

Police set up a cordon around the pub but never saw Lindrea or his associate, who left the cash-filled bag lying on a bench, leave the building.

Lindrea later told police that they didn’t sneak past the cordon but instead hid in a wall cavity for more than 12 hours until authorities had left.

The woman said she was “petrified” during the robbery, believing the men would shoot her and then come after her family.

“I walked into work, went to turn light on, and that’s when my whole life changed,” she said in a statement.

“My sense of safety was stripped away. I encountered a man standing there with a gun directly pointed at my face.

“I was in complete shock. I was shaking, crying, afraid and thinking to myself: ‘I am never going to see my family again – I’m going to die at work’.”

The woman quit working at the pub after seven years of employment due to the psychological impact of the robbery.

“The crying still happens and the sense of fear is still there – not knowing what will happen,” she said.

“I’m constantly on edge due to this experience.”

Lindrea must serve eight years and nine months behind bars before being eligible for parole.

He previously served 24 years in prison for the murder of two people he shot after being asked to leave a Kinglake party he gatecrashed in 1992.