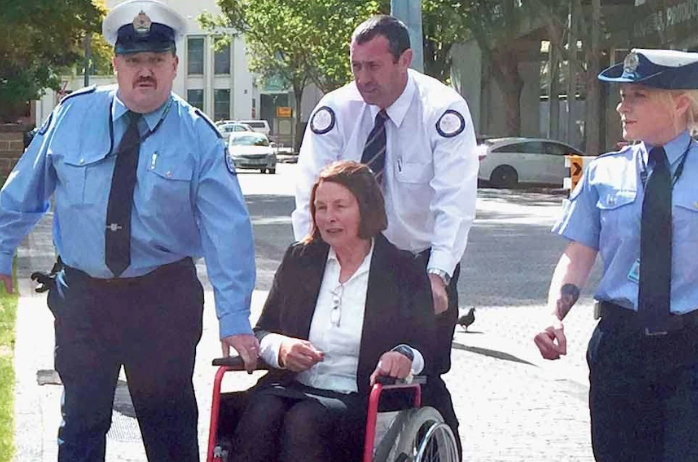 Susan Neill-Fraser is led into court for an earlier appearance.

The appeal of Susan Neill-Fraser has moved to closing arguments ahead of schedule, following a volatile two days in which the convicted murderer’s lawyers abandoned their key witness.

Neill-Fraser is serving a 23-year sentence for the murder of her partner Bob Chappell.

Mr Chappell disappeared from his yacht, which was moored in Hobart’s River Derwent, on Australia Day 2009.

There was no body or murder weapon and the court heard on Wednesday that the original trial relied entirely on “circumstantial evidence”.

In 2019, Neill-Fraser was granted leave to appeal after a Supreme Court judge found she had fresh and compelling evidence.

On Monday, the court heard that Meghan Vass – whose DNA was found on the yacht – was the key witness and her oral evidence would be “fresh and compelling”.

On day one, Ms Vass gave evidence that she had been aboard the yacht with three men when they encountered Mr Chappell.

She told the court one of the men started “flipping out” and the fight turned violent.

But during cross-examination on day two of the appeal, Ms Vass began to recant all of her evidence.

She said there had been just two men on the yacht, then one and then said she had never been on the boat.

“You can’t remember being on that boat, can you?” asked Director of Public Prosecutions Daryl Coates.

Mr Richter later told the court he wanted to relieve Ms Vass and abandon her evidence, with the exception of the DNA that was found on the yacht.

“We are in a situation which we concede cannot support the notion of fresh and compelling evidence leading to miscarriage of justice,” he said.

On Wednesday morning, the court had expected to hear from a DNA expert witness, but the prosecution did not proceed with the evidence.

Mr Carr said the evidence Ms Vass had given over two days was “not of any relevance to this court’s task”.

He took the court through the original trial in order to “identify issues”.

“The real issue at trial was whether the prosecution excluded any evidence of a hypothesis consistent with innocence,” he said.

He pointed to an account from the original trial of a grey dinghy – that was not the Four Wind’s tender – tied up alongside the yacht late on the afternoon of January 26, 2009.

He also told the court there had been no rational explanation for how Ms Vass’s DNA had gotten on the Four Winds.

“At some stage Meghan Vass was on the Four Winds,” he said.

“[It’s an] equally plausible hypothesis that she went there with the grey dinghy with some friends.

“[It was] hardly likely that she’d admit that to police … she can’t account for where she was on the 26th of January.

He is challenging the idea, put forward by the Crown at trial, that Ms Vass’s DNA could have arrived on the boat through a secondary transfer, such as someone walking it on.

“Mr Jones articulates what would in fact be required for the transference to have led to the deposit of the DNA that was actually found on the Four Winds,” he said.

“That explanation is entirely inconsistent with the way the matter was put to the jury on this critical issue by the learned prosecution at trial.”

Mr Carr told the court that had the original jury been offered the opinion of Mr Jones, and taken into account the report of the “grey dinghy”, they would have been left with a reasonable doubt.

“There was a substantial miscarriage of justice and the appeal should be allowed and a retrial ordered,” said Mr Carr.

“It was not treated as a crime scene [and] it was [eventually] transferred to Cleanlift in Goodwood that does boat repairs.”

The court heard on Monday that Ms Vass’s partner at the time lived in Goodwood and she spent time in that area.

Mr Coates told the court the swab that had the DNA sample from Ms Vass was not taken until January 30.

“At least 21 people apart from scientists got on the boat, prior to the swab being taken,” he said.

“They included people like the person who towed the boat, insurance assessors, other civilians, police officers, accused and her family.”

He said the Crown maintained its position that Ms Vass was never on the boat. However, he did point to a second theory.

“If the jury rejected that [it was a secondary transfer], they could’ve still concluded that she got on the boat afterwards,” he said.

He also said a significant part of Mr Jones’s evidence was “more favourable to the Crown”.

“He gave evidence that given the quantity of the DNA, and the fact there was no degradation, he thought the most likely [scenario] was the sample had only been there one or two days,” he said.

“It strongly supports that it was transferred or Ms Vass being there after sinking.”