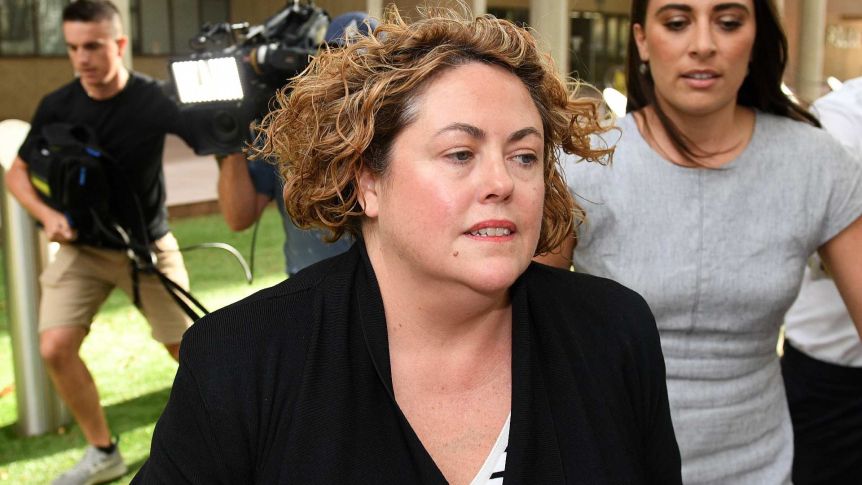 Rosemary Rogers will be eligible for parole in October, 2025. Photo: ABC/AAP/Dan Himbrechts

A former National Australia Bank (NAB) employee who was motivated by “greed, personal gain and self-gratification” has been jailed for eight years over her role in a $5.5 million scam.

Rosemary Rogers, 45, worked at NAB for more than two decades, including nine years as a chief of staff to CEOs Andrew Thorburn and Cameron Clyne.

A Sydney court heard that between 2013 and 2017, Rogers conspired to defraud the bank.

Investigators found Rogers had approved inflated invoices by Human Group for the event and function services to NAB over four years.

Over that period, the court heard Rogers received more than $5.5 million from the event company “as an inducement or reward to ensure that Human Group maintained a contract with NAB”.

In one instance, up to $620,000 was spent to fly Rogers and members of her extended family to the US, where they chartered a private jet and a yacht.

The court found many of these lavish trips – labelled under codes like “Project Europe” and “Project Outlaw” on expenditure reports – were paid for by the Human Group and linked to payments received by NAB.

The prosecution told the court Rogers was motivated by “greed, personal gain and self-gratification”.

In sentencing, Judge Paul Conlon said the benefits she received went “well beyond compensating family for any perceived neglect”.

“I find it absolutely staggering that this fraud were not detected by some appropriate system of internal auditing by NAB,” he said.

“All that was required was for Human Group to submit invoices that were devoid of detail and the offender would merely approve them courtesy of her delegated authority.”

The scheme came undone when an anonymous whistle-blower sent a letter to NAB executives in 2017, alleging “Rose” had been receiving money and gifts over a number of years from Ms Rosamond.

Rogers was called into a meeting with NAB while on an annual leave and told investigators she and Ms Rosamond had a “purely business relationship”.

In SMS exchanges between the pair between 2016 and 2018, Rogers and Ms Rosamond referred to each other as “bestie” and “sister from another mother”.

Ms Rosamond’s Potts Point home was raided in 2018 and Rogers handed herself in to police in March 2019.

NAB Chief Legal Counsel Sharon Cook said she was “pleased” one part of the matter was resolved.

“Since becoming aware of the issue, we have made changes to strengthen controls in our organisation, including changing delegations and introducing additional checks on expenses,” she said.

“As there is a second party involved who is still before the Court, NAB is unable to comment further on this matter.

“We are taking court action to recover the proceeds of the alleged fraud.”

Rogers will have to serve at least four years and nine months of her sentence, and will be eligible for parole in October, 2025.