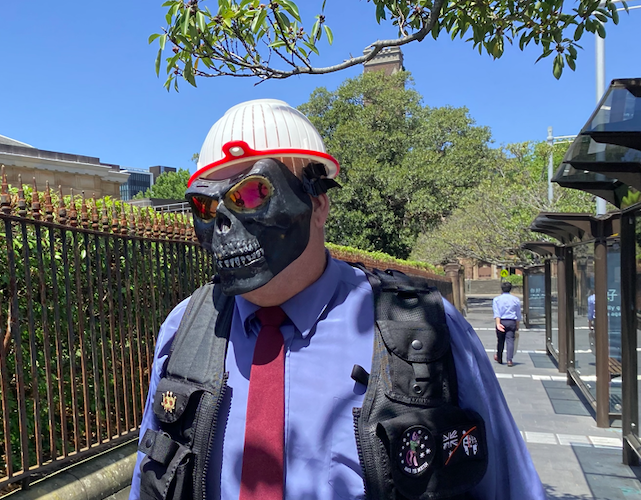 A judge’s comment about the Church of the Flying Spaghetti Monster has caused a downward spiral in the mental state of a colander-wearing man being sentenced for a ski-field bashing, his lawyer says.

Keith Melvyn Wass, 54, was due to appear for sentence on Friday over his assault of Thredbo general manager Jordan Rogers in August 2017.

But his lawyer said Mr Wass was too unwell to face District Court Judge Garry Neilson due to comments made at a prior sentencing hearing.

During a discussion in September about Mr Wass’s beliefs, the judge said wearing a colander on his head for religious reasons was “absurd and ridiculous behaviour”.

“Your Honour’s comment triggered in him the kind of response that has caused him problems on prior occasions when he feels he’s being discriminated against,” lawyer Peter Pearsall told the judge on Friday.

“He has a set, bona fide belief in a particular religion. Unfortunately, that has triggered him and it’s resulted in a discernible and real decline … and results in him taking a step that can only be seen as self-destructive.”

Mr Wass, who has a history of mental illness, had tried to withdraw his guilty pleas to assault occasioning actual bodily harm and using an offensive weapon with intent to commit an indictable offence, the court heard.

Judge Neilson questioned whether the 54-year-old was just worried before being sentenced.

“The problem becomes, is it [Friday’s delay] just manipulative behaviour?” he asked.

Mr Pearsall said his solicitor hadn’t been able to have a rational conversation in the past month with the “disengaged” and “distressed” man.

“He’s just not connected with what is going on because of the turmoil going on in his mind,” Mr Pearsall said.

“The community would be much better off by allowing us to do another [sentence assessment report].”

Judge Neilson rolled his eyes when told the Church of the Flying Spaghetti Monster is possibly recognised as a church by the Australian Tax Office.

He pointed out the case involving the university-educated man had been before the court 22 times.

“The amount of time and effort being consumed is just enormous,” he said.

The judge was told that Mr Wass would attract extra attention in jail by virtue of his colander-wearing habits.

“People are entitled to believe what they believe,” Judge Neilson replied.

“But it follows that they must wear the consequences of it.”

“If your client doesn’t cooperate, then he loses the opportunity,” the judge said.

“This has to be brought to an end.

“There has to be an end to kicking the can down the road.”

Mr Wass, who arrived at the Darlinghurst Courthouse but never entered Judge Neilson’s court, offered journalists material on Pastafarianism as he left.

As well as donning a $6 plastic strainer on his head, he wore a full-face black skull mask and a flak jacket with patches stating “(f––) it”, “Operation Enduring F–– ery COVID-19” and Latin for “the love of death”.