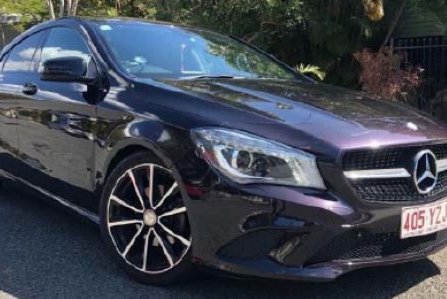 Police allege the man would take vehicles he paid for with stolen cheques before they were rejected by banks. Photo: ABC/Queensland Police Service

Police alleged the man contacted people who had listed their cars for sale online, then paid stolen cheques into their bank accounts using ATM deposits.

Detectives said the man then took the cars before the cheques were rejected by the bank.

It is alleged he obtained luxury cars, including three Mercedes Benz, two Audis and two Volkswagens, between July and October.

The man was arrested on Tuesday afternoon at a shopping complex at Biggera Waters on the Gold Coast.

Police seized a Volkswagen and allegedly found a taser and the illegal drugs GHB and methylamphetamine inside the car.

The man was charged with 19 offences.

He is due to appear in the Southport Magistrates Court on November 9.

Police said a blue Volkswagen hatch, registration number SGN-289, and a purple Mercedes sedan, 405-YZJ, still have not been found.

Detectives are appealing for anyone with any information about the missing cars to come forward.