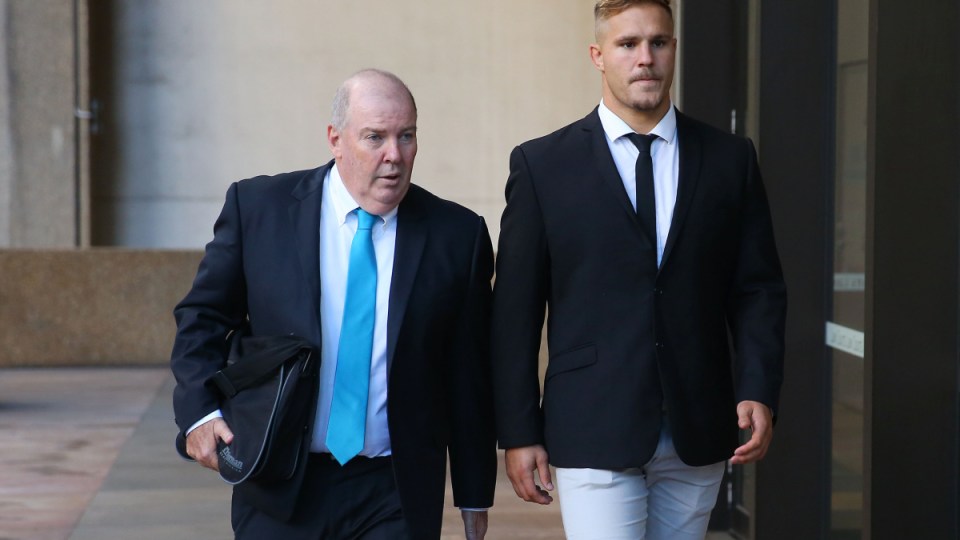 Messages sent out by Jack de Belin's alleged rape victim have been read to a NSW jury. Photo: Getty

Jack de Belin’s alleged rape victim messaged “help” to a friend after slipping away from the NRL star in a nightclub line, a jury has heard.

The St George Illawarra player, 29, and Shell Cove man Callan Sinclair, 23, have pleaded not guilty to the aggravated sexual assault of a woman in a North Wollongong unit in December 2018.

Both men say all three were consenting but the woman says they ignored her protests and cries.

The Wollongong District Court jury has heard the trio caught an Uber to the city’s CBD and joined a nightclub line after the alleged assault.

But the woman, then 19, quickly walked away from the line minutes later when some of the men’s friends arrived.

After getting around a corner, she opened Instagram and messaged a male friend she knew was also out partying, the court was told.

When asked, she told the friend she was “not that OK”.

But the court heard she declined to elaborate, saying “probably something I can’t tell you anyways”.

“For someone to just hear it straight up, it’s quite horrific,” she told the court on Wednesday.

“What had happened to me was quite horrific and I thought I couldn’t tell him at that time.”

That friend’s housemate then reached out on Snapchat. He’d seen the woman with Mr de Belin and Mr Sinclair before the alleged rape.

“The guys you saw me with just abused me,” she messaged him.

The woman told the court she turned down an offer to spend the night at the friend’s home, and another to smoke weed with a third person she’d messaged.

“I ended up going home to bed and crying myself to sleep,” she said.

Mr De Belin and Mr Sinclair are accused of “cheering each other on” while assaulting the tearful woman, who said they ignored her protests.

The footballer “doesn’t and never has” disputed sexual activity took place but says it was consensual, his barrister David Campbell SC told the jury on Tuesday.

“There is evidence both before and after that activity that is consistent with that activity being consensual activity,” he said.