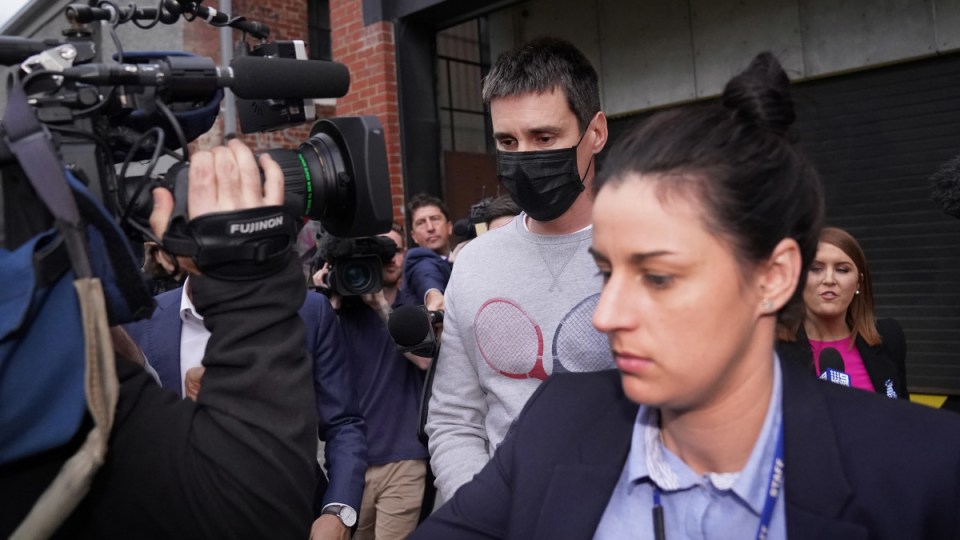 Mortgage broker Richard Pusey, 42, has been hit with another charge. Photo: AAP

Porsche driver Richard Pusey is ashamed of the “horrible things” he filmed himself telling a police officer as she died groaning for help on the side of a Melbourne road.

Mr Pusey faces more than a dozen charges after a truck crashed into four officers who had pulled him over for allegedly driving his Porsche at 149km/h along the Eastern Freeway in April.

A magistrate will rule on the charges next week, after Mr Pusey’s lawyers argued many of them were “fundamentally flawed” and should be tossed out.

But police have slapped the 42-year-old Porsche-driving mortgage broker with another offence – possessing an anti-speed measuring device.

It follows 15 others charges including driving at a dangerous speed, recklessly conduct endangering life and serious injury, driving under the influence, drug possession, failing to render assistance and outraging public decency.

“As tragic as this case is, for all of Mr Pusey’s faults, for all the criticism that could be made against this man … it can be said that [he] has been seriously overcharged,” Dermot Dann QC told Melbourne Magistrates Court on Wednesday.

He wants some of the offences – including endangering injury, destroying evidence, perverting the course of justice and failing to help at the scene – tossed out, labelling them “fundamentally flawed”.

Mr Pusey is not charged with causing the crash that killed senior constables Lynette Taylor and Kevin King, and constables Glen Humphris and Josh Prestney.

The 42-year-old escaped injury because he was urinating off the side of the road. He then pulled two phones from his wrecked Porsche and told Constable Taylor “there you go. Amazing, absolutely amazing” as she groaned for help.

“All I wanted was to go home and have my sushi and now you’ve “f—ed my f—ing car,” Mr Pusey told her before leaving the scene in someone else’s vehicle.

It not disputed that he filmed the crash aftermath, said those things or sent the footage to a federal police officer he knew as well as a legal representative and later deleted it.

“He was ashamed of what was on the phone … because of the horrible things he says,” Mr Dann said.

“It’s readily understandable he did not want police to view that content.”

Prosecutor Robyn Harper argued Mr Pusey couldn’t have been that remorseful because “he showed the footage to a pharmacist and receptionist at a doctor’s office”.

She does not oppose the charge of reckless conduct endangering life being dropped, but wants the others to stand.

“It’s owing to the presence of his motor vehicle that an accident occurred,” Ms Harper told the court.

Magistrate Donna Bakos will hand down her ruling next Wednesday on which charges should proceed.