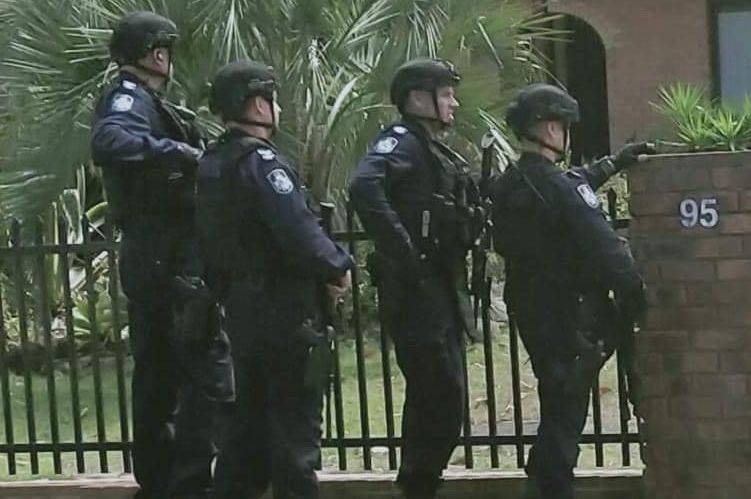 Officers were called to a property in Kelliher Street in Rothwell this morning after reports a woman was shot. Photo: ABC News: Rohmana Thompson

Police are searching for two men north of Brisbane after a 27-year-old woman was shot on Thursday morning.

Police said they tracked a vehicle to Bribie Island before making an emergency declaration just before 11am.

People were urged to avoid a suburban area on Bribie Island while specialist officers responded.

Detective Inspector Robert Hytch said the woman was taken to a home in Rothwell, near Deception Bay, with a “serious gunshot wound”.

“The woman was taken there and delivered to other family members so that they can call the ambulance,” Mr Hytch said.

“The victim is undergoing surgery this afternoon and is in a serious condition, but she’s expected to survive.

“The circumstances of how the woman got shot are still under investigation.”

Police believe one of the men is still within the declared public emergency zone in Bribie Island.

The second man was spotted on Bribie Island on Thursday, but it is believed he has since escaped outside the emergency zone.

Detective Inspector Hytch said one of the men had escaped a cordoned area set up by police to catch him.

Specialist police and dog squads were also called in to assist with the search.

“We believe we know who the males are.”

He said one of the men was known to police for an unrelated matter and details of the shooting were still unclear.

“It could be quite explainable that it was an accidental shooting, however we need to locate the two males who have decamped to be able to build the story as to what took place.”

Detective Inspector Hytch said police had recovered the gun they believed was used in the shooting.

“I don’t think there is any threat to the local community,” he said.