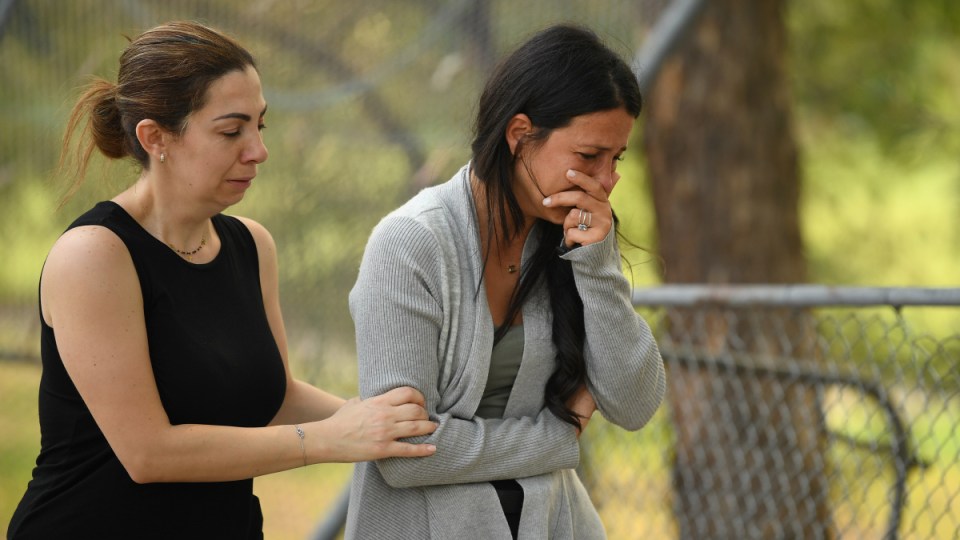 Leila Geagea (right) at the scene of the accident. Photo: AAP

The grief-stricken mother of three children killed at the hands of an alleged drink-driver says she won’t hate the man who was behind the wheel.

Leila Geagea, the mother of Sienna, Angelina and Antony, said she forgave the alleged culprit as she visited the scene of the tragedy on Monday.

“I think in my heart I forgive him. But I want the court to be fair. I’m not going to hate him because that’s not who we are,” she told reporters.

“It feels very unreal. I feel like I’m still waiting for them to come home.”

Antony, Angelina and Sienna Abdallah, and their second cousin Veronique Sakr, were killed when they were hit by a 4WD while they walked to get ice cream on Saturday night.

People have left hundreds of bunches of flowers, as well as candles and balloons in the area where they were hit on Bettington Road.

The children’s father, Danny Abdallah, returned to the site on Monday, saying the tributes people had left there were “touching”.

“I don’t know what to say. I’m numb, probably that’s what I feel at the moment. All I want to say is please, drivers, be careful,” he said.

The children were all aged between nine and 13. Three of their relatives were also injured in the incident.

Veronique’s school, Santa Sabina College in Strathfield, posted a tribute for her on social media.

“[She] tragically lost her life last night along with three of her cousins,” Principal Paulina Skerman said on Facebook.

“Our prayers and thoughts are with her family and friends.”

The 29-year-old was charged with several counts of manslaughter, dangerous driving and high-range drunk driving.

The crash has prompted calls from medical experts to reduce the blood alcohol limit for drivers to zero.

However, NSW Police Minister David Elliott said it was unlikely drivers who broke current laws would comply with even stricter ones.

Mr Davidson’s case was heard in court yesterday and was adjourned until April.

Also on Monday, NSW Police that scammers were trying to cash in on the children’s deaths.

“Do not donate via fund-raising pages on platforms that do not verify the legitimacy of the fundraiser or that do not guarantee your money will be returned if the page is determined to be fraudulent,” an NSW Police spokesperson said.