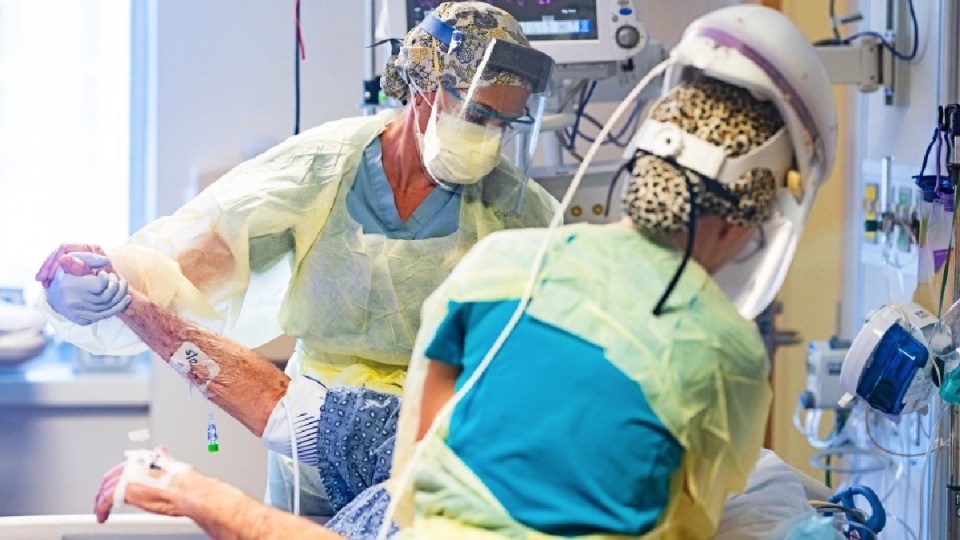 Nearly one in 12 public hospital beds are occupied by a COVID-positive patient. Photo: Getty

Hospitals across the country are experiencing enormous pressure from COVID-19 despite the peak of the recent Omicron wave passing.

Health Minister Mark Butler says the number of cases in hospital have been falling for several days and are now several hundred below the high recorded a few weeks earlier.

“But still there are close to 5000 Australians in the hospital with COVID. That’s close to one in 12 public hospital beds, so there’s no question that our doctors, and nurses and other hospital workers are still under enormous pressure,” he told ABC radio on Friday.

Minister Butler said the peak of the recent Omicron wave had appeared earlier than expected, although the amount of strain placed on hospitals had been exacerbated by large numbers of influenza cases.

“It’s much harder in winter because hospitals get so many other cases through their doors in winter as well as flu cases,” he said.

“(COVID-19 has) not become a seasonal virus in the way that influenza is around winter, for example.”

The health minister also expressed concern the take-up of third vaccine doses was lagging despite a large number of people getting fourth doses following an expansion of eligibility.

“We’ve been seeing more than half a million people get that fourth dose every week, but I am worried about the third dose,” he said.

The government earlier this week announced vaccines had been approved for some children aged six months to five years old.

Young children who are immunocompromised or have severe illnesses will have access to the Moderna vaccine from September 5, with an estimated 70,000 from the age group eligible.

Minister Butler said chief health officers from across the country were also monitoring whether the isolation period for people who contracted COVID-19 could be reduced.

However, he said he had not received any advice that the current seven-day isolation period should be shortened.

“There’s no question that people isolating for seven days is utterly inconvenient,” he said.

“Distressing as that is, it’s an incredibly important public health measure. We know that particularly with these Omicron variants people are highly infectious over the course of those seven days.”

Meanwhile, a bidding war could erupt among state premiers vying to host a new US-style centre for disease control for Australia.

Anthony Albanese has signalled possible funding for the new centre – an election promise – in the October budget after discussing the facility with state and territory counterparts in a national cabinet meeting.

The prime minister would not be drawn when pressed for further details, saying “stay tuned” for announcements in the upcoming budget.

Australia recorded almost 33,000 COVID-19 cases and 82 deaths on Friday and more than 4600 people are in hospital with the virus.

More than 71 per cent of those eligible have received three doses of a COVID-19 vaccine, but only 36.3 per cent of people aged 30 and over have had four shots.

Queensland: 4926 cases, eight deaths, 736 in hospital with eight in ICU

Northern Territory: 257 cases, no deaths, 54 in hospital with one in ICU