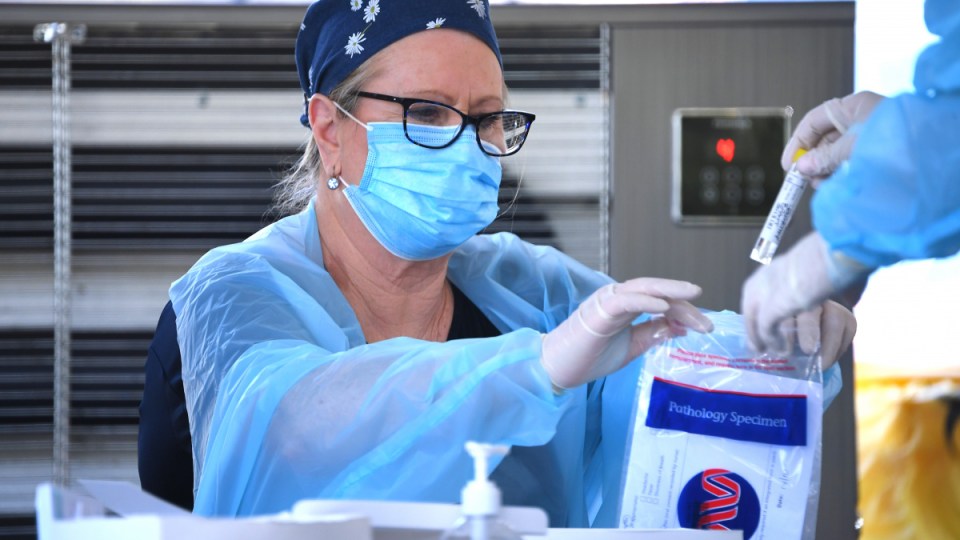 Despite the high uptake of vaccines and dboosters, the COVID virus is infecting more people than ever. Photo: AAP

The relentless spread of COVID-19 across Australia is nudging the tally of virus-related lost lives to almost 12,000, a milestone figure that could be surpassed as early as Monday.

The nation has recorded three straight days of 100-plus deaths related to the virus, elevated by historical COVID-19 fatalities hitting the system in Victoria.

Another 26 have been reported so far on Sunday in Victoria and NSW – taking Australia’s total toll across the pandemic to 11,831 – along with 18,108 new cases.

Victorian Chief Health Officer Brett Sutton estimates only half the actual number of infections are being picked up but says his state has probably hit its case peak, with numbers expected to flatten and fall in coming days.

While the number of COVID-infected people in Victorian hospitals fell by 69 on Sunday, Professor Sutton had earlier warned hospitalisation figures were unlikely to plateau for another week or two.

“We have to think about everyone around us and our health system,” he told reporters on Friday.

One in 12 public hospital beds across Australia are filled by a COVID-19 patient, despite fewer people ending up in intensive care than during previous waves of the virus.

“We’re numbering about 330,000 cases on a seven-day average per week at the moment, but we know from sampling from the positivity rates that we’re getting for PCR tests, that the real number is probably at least twice that,” he told the Australian Medical Association national conference on Saturday.

“It is an extraordinary number of infections with this highly infectious new (Omicron) subvariant.”

Mr Butler said the one upside of the current Omicron wave was that ICU rates were well below where they were in January, while the number of flu cases was also declining sharply.

But he added that the take-up of third vaccine doses had “stalled to quite an alarming extent”, with around five million people yet to receive a booster after their two initial shots.