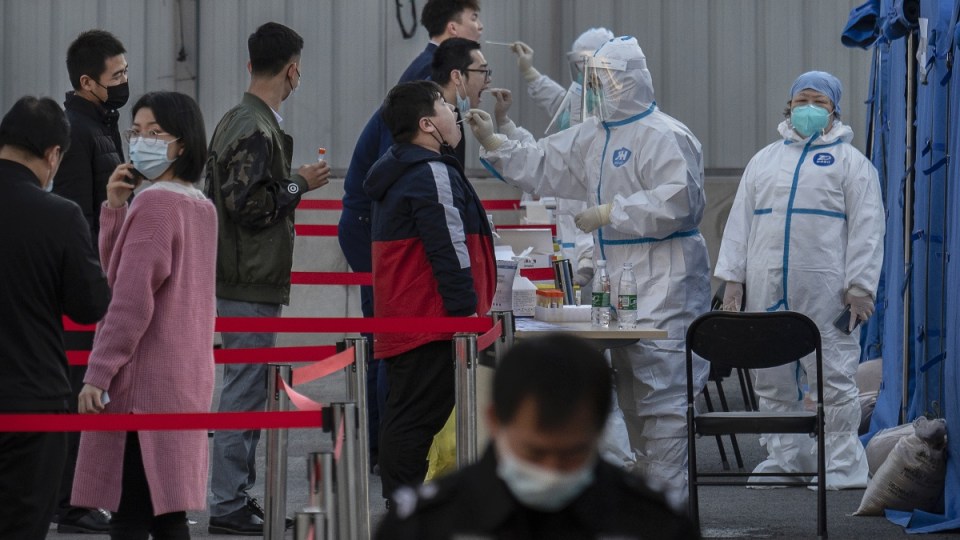 The Chinese capital began mass testing people in one of its 16 districts where most of the new cases have been found. Photo: Getty

China has sent the military and thousands of healthcare workers into Shanghai to help with COVID-19 tests for all of its 26 million residents, in one of its biggest ever public health responses.

Some residents were asked to wake up before dawn on Monday for nucleic acid testing at their housing compounds, many queuing up in their pyjamas.

The People’s Liberation Army on Sunday dispatched more than 2000 medical personnel recruited from across the army, navy and joint logistics support forces to Shanghai, an armed forces newspaper reported.

Multiple provinces such Jiangsu, Zhejiang and Beijing have sent healthcare workers to Shanghai, according to media reports, with some estimates putting the total number at more than 10,000.

It is China’s largest public health response since it tackled the initial COVID-19 outbreak in Wuhan, where the novel coronavirus was first discovered in early 2020.

The State Council said the PLA dispatched over 4000 medical personnel to the province of Hubei, where Wuhan is, back then.

Shanghai, which began a two-stage lockdown last Monday that has been expanded to confine practically all residents to their homes, reported 8581 asymptomatic COVID-19 cases and 425 symptomatic COVID cases for April 3.

It also asked residents to self-test using antigen tests for COVID-19 on Sunday.

While the outbreak is small by global standards, the city has emerged as a test of China’s elimination strategy based on testing, tracing and quarantining all positive cases and their close contacts.

The strategy has shown signs of strain, with residents complaining of crowded and unsanitary central quarantine centres, as well as difficulties in securing food supplies and essential medical help.

Still, Chinese President Xi Jinping has urged the country to curb the momentum of the outbreak as soon as possible while sticking to the “dynamic-clearance” policy.

On Saturday, Vice-Premier Sun Chunlan, who was sent to Shanghai by the central government, urged the city to “make resolute and swift moves” to curb the pandemic.