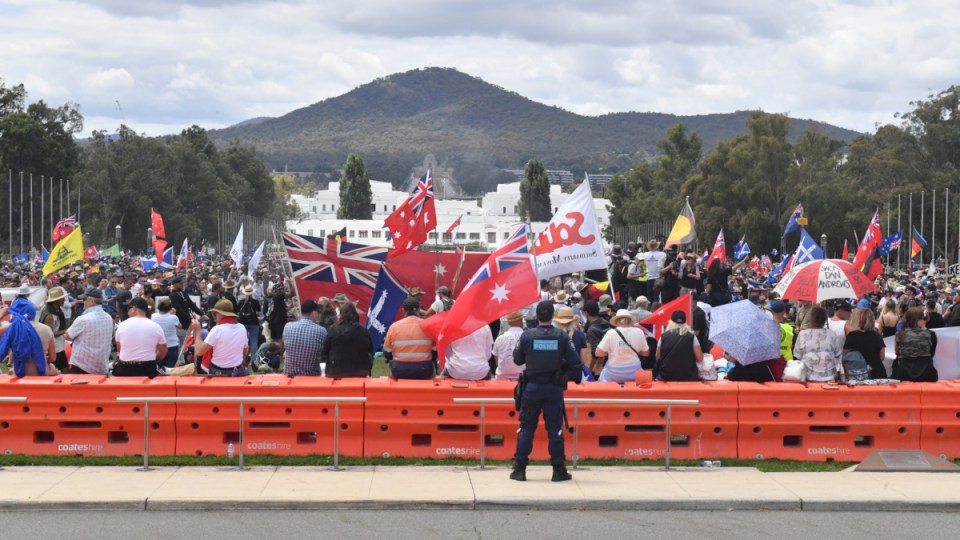 A protester at an anti-vaccination rally in Canberra had a firearm and a map of Parliament House. Photo: AAP

A protester who was arrested during anti-vaccination protests in Canberra on the weekend was found with a firearm, ammunition and a map of Parliament House.

The arrest was made as more than 10,000 people descended on Parliament House on Saturday, shutting down major roads and causing widespread disruption across Canberra.

Another protester was arrested on Saturday after he rammed a barricade with a truck, with officers having to smash a window to get the man out of the vehicle.

Commissioner Kershaw said overall protesters were well behaved during the demonstration, but there a number of people were identified from police intelligence.

“We had specific information on some of those … and that was how we were able to work with the state police intelligence agencies as well who were able to help us with the numbers coming into Canberra,” he said.

“We were concerned when the number started to swell, and then some of the intentions were not clear, they were not a coordinated group, which actually presents a different challenge for us.”

The commissioner said about 200 AFP officers were involved in policing efforts during the protests.

The protesters were part of the Convoy to Canberra, which has been carrying out rallies and disruptions across the city for two weeks.

Saturday’s protests were the largest involving the group.

Thousands had been staying on campgrounds in Canberra’s north but were evicted on Sunday by police, due to the grounds being needed for the upcoming Canberra Show.