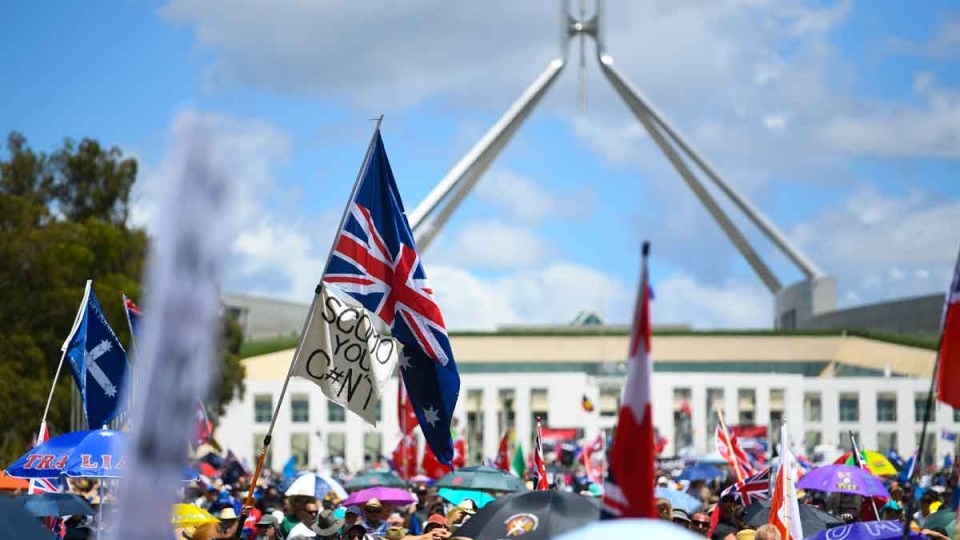 Thousands of protesters chanted 'Sack them all' outside federal parliament. Photo: AAP

Ten thousand people marched to Parliament House in Canberra at the weekend – but that wasn’t the only sign confidence in the Morrison government’s handling of the pandemic is at a new low.

The key complaint of the protesters was vaccine mandates across the country, something Prime Minister Scott Morrison says are largely the decisions of state premiers, not his.

He insists the federal government has only ever supported mandates that relate to aged-care workers, disability workers and those who are working in high-risk situations in the health system.

Labor senator Kristina Keneally said it was Mr Morrison who set up the national cabinet and was prepared to take all the credit when the premiers took their measures.

“As soon as a group of protesters walks into town critical of some of those decisions, he points the fingers at the premiers, says ‘it’s not my fault, it’s theirs’,” Senator Keneally told ABC’s Insiders program.

ACT police wanted the protesters out of the campsite where they have congregated over the past couple of weeks by Sunday so the territory’s Canberra Show can be set up.

The clean-up also came as politicians prepared to return to Parliament House on Monday for the final sitting week before the March Budget.

Expect Coalition ministers to face pressure to explain the latest reports of record low confidence in the Morrison government.

More on the latest Newspoll figures and a study by Australian National University, below.

In other coronavirus news on Monday, Western Australia is considering restrictions while Victoria will lift some as authorities in that state declare the worst of the Omicron wave has passed.

There were another 46 deaths. NSW had 22, Victoria 18, Queensland four and South Australia two.

Here’s a wrap of the coronavirus headlines on Monday morning.

Australians’ confidence in the Morrison government is at its lowest level since the start of the COVID-19 pandemic.

A Newspoll published online by The Australian on Sunday shows the Liberal-led Coalition’s primary vote remained on a post-election record low of 34 per cent.

Surveying 1526 voters nationally between February 9-12, the poll released on Sunday night found the Coalition’s primary vote remained on a record low of 34 per cent as Labor continued to peak on 41 per cent.

But a three-point slump for the Greens (11 per cent to 8 per cent) and a corresponding rise in support for independents and minor parties to a record 14 per cent left the two-party-preferred result at 55-45.

Pauline Hanson’s One Nation remained steady at 3 per cent.

Meanwhile, an Australian National University study of 3472 people in January found only about a third had a “great deal” or “quite a lot” of confidence in the government.

This is down from 60 per cent of people in May 2020 and only slightly above confidence levels of 27.3 per cent during the Black Summer bushfires.

“Clearly the handling of the pandemic and the ongoing wave of Omicron infections is starting to take a real toll on how all major institutions are viewed by Australians,” study co-author Professor Nicholas Biddle said.

Between October and January, satisfaction with the direction the country was going dropped.

The proportion of people satisfied or very satisfied with the country’s direction went from 69.8 per cent to 63.6 per cent.

“One of the potential reasons for this drop … is that respondents don’t feel that key institutions are handling the pandemic as well as they have in the past, or as well as they should be doing given the current circumstances,” Professor Biddle said.

During the bushfires, 59.5 per cent of people were happy with where the country was headed.

The survey is part of the ANU’s ongoing study about the effects of the pandemic.

Federal minister Keith Pitt agrees with Mr Morrison that the thousands of protesters who surrounded Parliament House in Canberra on Saturday over vaccine mandates are attacking the wrong place.

Mr Morrison insists his government has only ever supported mandates for aged-care and disability workers, and those who are working in high-risk situations in the health system.

All other mandates had been imposed unilaterally by state governments, he said.

Mr Pitt agreed and said while everyone was entitled to protest as their democratic right, in this case it was misdirected.

“These are the decisions of the premiers, it’s not the federal government that is making these decisions, these are state-based decisions,” he told Sky News’ Sunday Agenda program.

“They vary all over the country, There is so many decisions being taken, there is a lot of confusion around it.”

But Labor senator Kristina Keneally said Mr Morrison had set up the national cabinet and was prepared to take the credit when the premiers took their measures.

“As soon as a group of protesters walks into town critical of some of those decisions, he points the fingers at the premiers, says ‘it’s not my fault, it’s theirs’,” Senator Keneally told ABC’s Insiders program.

“He should stand up and condemn the violent extremists who are part of that protest.

“And he should make clear that has no place in Australian democracy.”

Victoria will lift its COVID-19 health system alert as state authorities declare the worst of the Omicron wave has passed.

At midday Monday the unprecedented “code brown”, implemented more than three weeks ago, will end.

Health Minister Martin Foley said on Friday the government was confident the alert could be safely lifted. But hospitals were “still going to be very, very busy”.

Melbourne public hospitals will continue to be restricted to emergency and urgent elective surgery, with the exception of the Peter MacCallum Cancer Centre and the Royal Eye and Ear Hospital.

They, and regional public hospitals can resume category two elective surgery if staff are available.

Victoria had 7223 cases and 18 virus-related deaths on Sunday.

Some 465 people are hospitalised, with 181 people in intensive care and 17 on ventilators.

Premier Daniel Andrews said on Sunday there was room for the state to adjust some of its restrictions.

“We hope to make some announcements quite soon,” he said.

“Now that we’ve hit the peak of Omicron, now those cases are coming down, we do have some room to make some refinements and adjustments.”

Queensland has ditched check-ins at venues that don’t require proof of vaccination. Mr Andrews suggested Victoria would ease its requirements by the end of February, in line with NSW.

Density limits are also under review.

More than half of Victoria’s eligible population have received a third vaccine dose.

WA had 38 local coronavirus cases on Sunday, as Premier Mark McGowan warned warns social restrictions were likely to be introduced.

“We haven’t actually made a decision on when [further restrictions] will come in, but at some point in time they will come in,” Mr McGowan said.

WA continues to add to its stockpile of rapid antigen tests but Mr McGowan said PCR testing would remain the preferred method as long as the state has capacity.

He said the state’s clinics could handle 35,000 PCR tests daily – and were currently only at about 15 to 20 per cent of that.

The state also has 8.8 million RATs in its stockpile, with another 2.4 million expected to arrive within the week.

It is mandatory to report positive rapid antigen tests to state health authorities, which 10 of Sunday’s positive cases had done.

“We just need to know what the spread of the virus is in the community and we rely upon people doing the right thing in order to inform us of that,” Mr McGowan said.

Health Minister Amber-Jade Sanderson said an advertising campaign would be launched to educate the public about close contact definitions and isolation requirements as the state prepares for “living with the virus”.

“Our public health and social measures including mask wearing and isolation are doing a good job of keeping case numbers low but we do not expect that this will continue forever. We know that the Omicron variant is highly transmissible,” Ms Sanderson said.