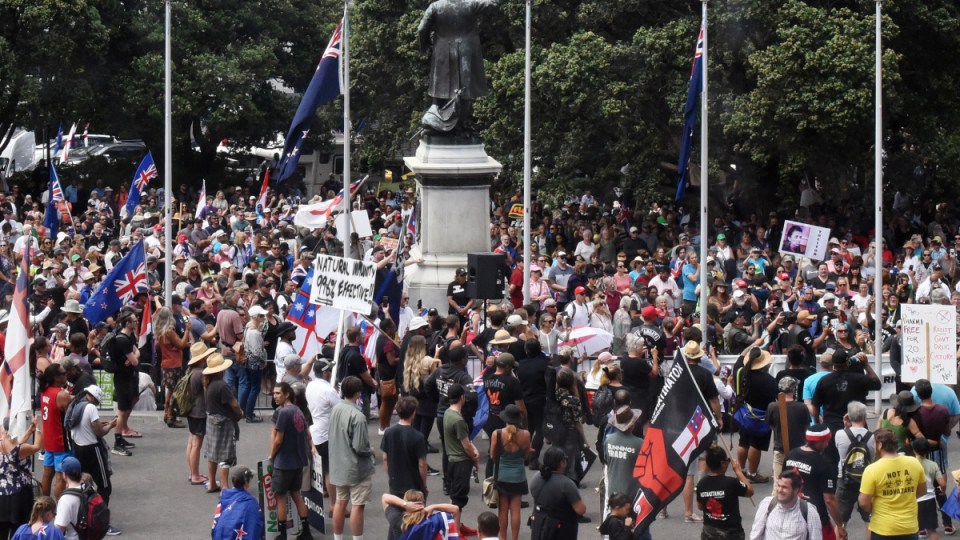 Police have arrested anti-mandate protesters who have set up camp on the lawns of New Zealand’s parliament.

The ongoing Convoy 2022 NZ protest in Wellington turned ugly on Wednesday, four days after many left far-flung parts of New Zealand to protest in the capital.

Trucks, vans, cars and buses departed from Cape Reinga in the north and Bluff in the south, picking up supporters en route.

On Tuesday, more than 1000 Kiwis rallied outside parliament on the first sitting day of the year, calling on the government to restore freedoms taken away during the COVID-19 pandemic.

That night about 100 camped on the lawns – contrary to the Speaker’s rules for parliament – waking up on Wednesday to continue their protest.

For the most part, the boisterous rally did not tip over into anti-social behaviour, though several shouted abuse towards Prime Minister Jacinda Ardern and other MPs — none of whom attended — and journalists.

A handful displayed signs calling for politicians to be hanged or tried for war crimes. More told Ms Ardern to resign.

On Wednesday, a bulked-up police presence met greater resistance, with some of the protesters arrested for attempting to break the police line separating them from parliament.

“Police have engaged with protest leaders and encouraged them to follow the advice of the Speaker of the House last night, who provided guidelines about protest activity,” Superintendent Corrie Parnell said.

“Police are asking protesters to dismantle any structures that have been erected on the grounds, such as tents and marquees.

“Police will continue to have a significant presence at parliament … and will deal with incidents as they arise, recognising individuals’ lawful right to peaceful protest.”

Newshub reported many protesters planned to stay all week.

Ms Ardern appeared unbothered by the protest, declining to call on the group to move on, saying it was a matter for police.

“I’ve seen a range of protests over my time and this is certainly not large in scale … it’s a small group,” she told Newstalk ZB.

The group might be small, but it is certainly annoying Wellingtonians.

Many locals have voiced their anger at convoy vehicles parked in the streets around parliament, restricting movement and lengthening daily transits.

Mr Mallard has told protesters their tents could be confiscated, and trespass notices issued, should they attempt to linger after dark on Wednesday.

Measures taken to limit the spread of the virus in NZ – including vaccination, and mandates in many workforces – have enraged a fringe group, including the Convoy 2022 NZ group.

Their views are well outside the mainstream.

As many noted on social media, on the same day 1000 protesters rallied at parliament, 61,000 Kiwis received a vaccine.

As of Wednesday, 94 per cent of eligible New Zealanders are double-dosed, with booster uptake growing.

There are 16 people in hospital with the virus, but none in intensive care.