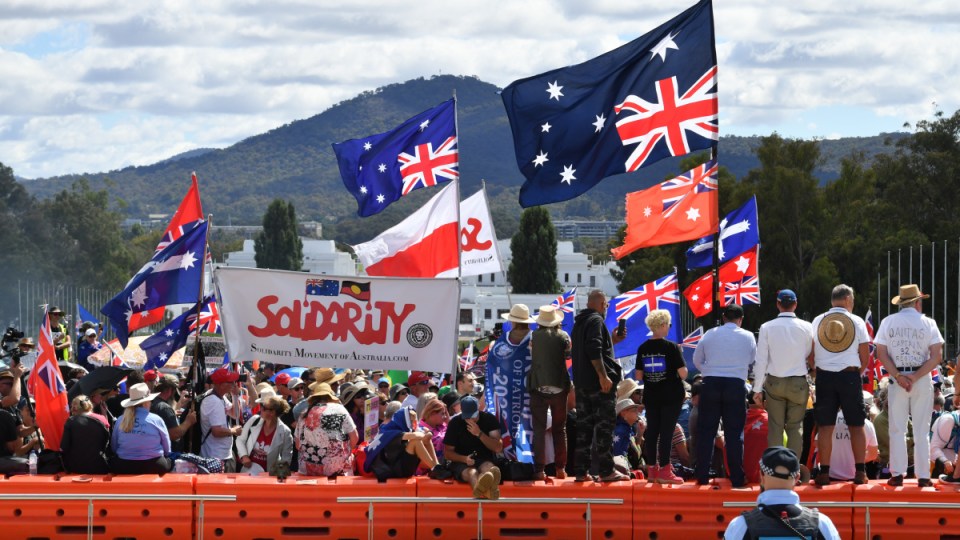 Up to 3000 protesters are expected at Parliament House on Tuesday. Photo: AAP

A group of anti-vaccination protesters have been let into Parliament House as hundreds of demonstrators held rallies outside the building.

United Australia Party MP Craig Kelly, who has been a vocal advocate against vaccines, negotiated for a small group of protesters to be signed in as his visitors.

Mr Kelly had been trying to let a group of protesters to enter parliament, which has been closed to the public during the sitting week because of COVID-19 protocols, to hand a list of demands to the government.

The group has called for an end to vaccine mandates and has demanded a meeting with Prime Minister Scott Morrison.

Mr Kelly later tweeted an open letter from the protesters to Mr Morrison, Opposition Leader Anthony Albanese and the Speaker of the House of Representatives, which he said came from “the Australian people standing up for their freedom”.

As well as repeating the demand on vaccine mandates, the letter called borders to remain open and a rejection of moves for “a society based on digital identity”.

The protesters also demanded an end to states of emergency and the reinstatement of those “who have lost jobs due to vaccine mandates”. They also want an independent federal investigative body to investigate “misconduct during the COVID-19 period.”

The Convoy to Canberra have been holding protests there for more than a week, targeting Parliament House, the governor-general’s residence and the National Press Club.

Police had warned Tuesday’s protests, to coincide with the resumption of parliament, would be the largest yet.

While the number of protesters are in the hundreds, it is well below the more than 3000 expected to attend.

Mr Kelly is not the only member of parliament to engage with the protesters. Earlier on Tuesday, vocal anti-vaccination government senator Gerard Rennick was among those protesting outside Parliament House.

The rogue Liberal said he was working to make sure children were not vaccinated against the virus.

Senator Rennick was also reportedly handed a list of demands from the protesters, which he said he would take to Mr Morrison.

There is a large police presence around Parliament House, with protesters forced to stay inside large orange barricades set up on the front lawns.

Meanwhile, a GoFundMe campaign that had raised more than $179,000 for the protests has been cancelled by the crowdfunding site.