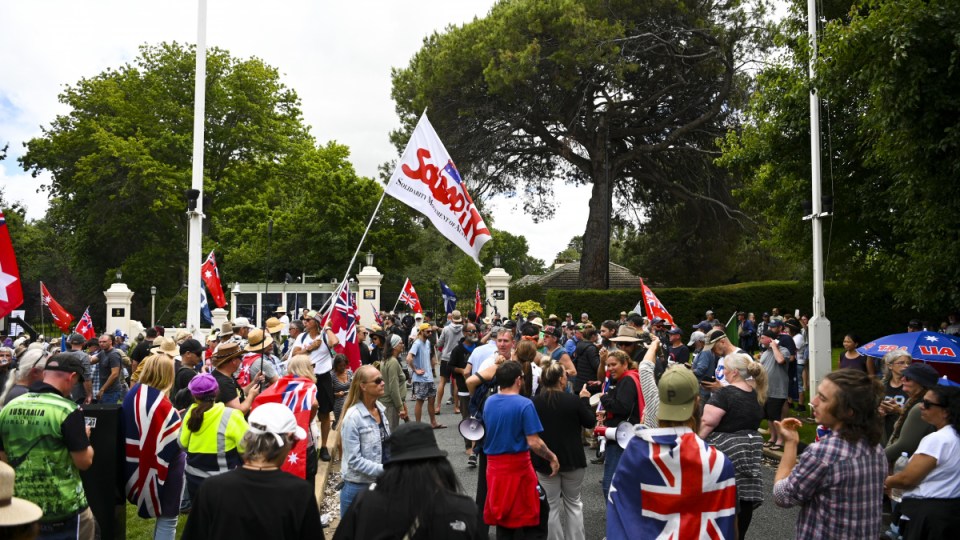 Protesters outside Government House in Canberra on Monday. Photo: AAP

Police expect the number of anti-vaccine mandate protesters that have been causing disruption across Canberra to peak on Tuesday, with thousands likely to attend rallies.

As demonstrations continue into a second week, anti-vaccination protesters, sovereign citizens and conspiracy theorists are set to gather on the lawns of Parliament House, coinciding with parliament resuming.

ACT police officials have said more than 3000 demonstrators are in Canberra, with the number expected to grow on Tuesday.

It came as a crowd of more than 500 protesters gathered outside the governor-general’s official residence on Monday.

Protesters pulled down the Australian flag on a flag pole outside Government House and replaced it with the Australian red ensign – the merchant ship flag commandeered by anti-government protesters as a “people’s flag”.

Commander Linda Champion from ACT police said no arrests had been made in relation to Monday’s protests.

“The crowd have been generally well-behaved and peaceful,” she said.

“We’re putting every resource we can towards these protesters and their activities throughout the week.”

Demonstrators carried out protests across Canberra throughout the weekend, targeting Parliament House and Canberra Airport, with people blocking many main roads across the city.

One protester was arrested after hitting a traffic controller with their car as the controller tried to stop the vehicle.

The traffic controller had to be taken to hospital for minor injuries.

The driver faced court in relation to the incident on Monday.

Two others were arrested for stopping traffic during protests on the weekend, police said.

Footage has also emerged on social media of the protesters walking through shopping centres and abusing shop staff.

Commander Champion urged people to report the protesters if they were seen carrying out an offence.

“Those responsible will be held to account,” she said.

Police have warned Canberrans to expect further delays throughout the week as protests continue.