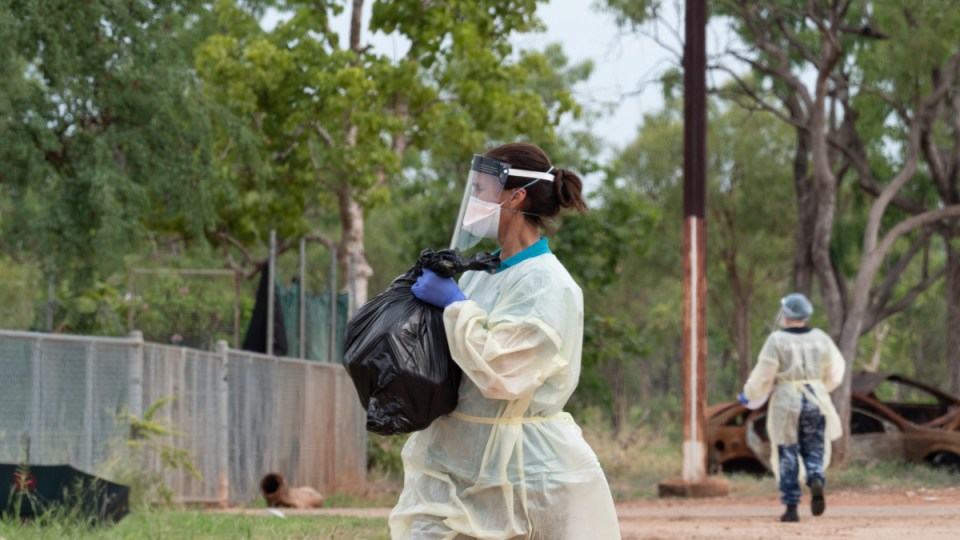 Biosecurity zones have been set up in the Northern Territory to slow the spread of the coronavirus. Photo: AAP

The Northern Territory has reported 977 new COVID-19 cases and the death of an unvaccinated resident at a central Australian aged care facility.

The man in his 80s died on Wednesday, bringing the Territory’s virus death toll to four, NT Health said in a statement of Thursday.

He was a resident at the virus-ravaged Old Timers Aged Care Service in Alice Springs and had underlying health conditions.

There are currently 141 infected patients in hospital, with 15 requiring oxygen. Six patients are in intensive care units.

The number of active cases in the territory is about 6,900.

Most of the cases are in the Top End with 658 new cases and 10 are under investigation.

A lock-in order remains current for the remote communities of Ampilatwatja, Milikapiti, Galiwin’ku, Milingimbi Island and Palumpa until Sunday.

Lajamanu will remain locked down until Monday.

A territory-wide mask indoors and outdoor face mask mandate is in place.

Meanwhile, the Commonwealth has declared biosecurity zones in and around Milikapiti, Milingimbi, Palumpa, Ampilatwatja, Galiwin’ku, Martjanba and Lajamanu to slow the pandemic’s spread.

The new measure prevents anyone entering or leaving designated zones and were based on advice from Chief Medical Officer Paul Kelly.

“These measures will help to contain the current outbreak by restricting entry into, and exit from, these communities,” Health Minister Greg Hunt said.

Central Land Council chief executive Les Turner said the measures would help hospitals cope, the NT government to get on top of the under-reporting of positive cases and buy time to lift vaccination rates.

“We called for this circuit breaker, among other measures, to slow down the out-of-control spread of the virus in our remote communities,” he said.

But Mr Turner also urged the Australian Defence Force be used to help the NT government staff roadblocks to enforce the biosecurity restrictions and assist with evacuations.

“This must not become another missed opportunity to call on the army to help manage the pandemic,” he said.

“Governments, Aboriginal organisations and communities must now work together to save lives.”

“They want to stop people coming in from outside. These biosecurity zones or bubbles will help slow the spread of COVID out bush and give us more time to get more people their second and third jabs,” he said.

The NT reported 1217 new coronavirus infections on Wednesday along with a third death, a woman in her 50s from the Mutitjulu community in central Australia.