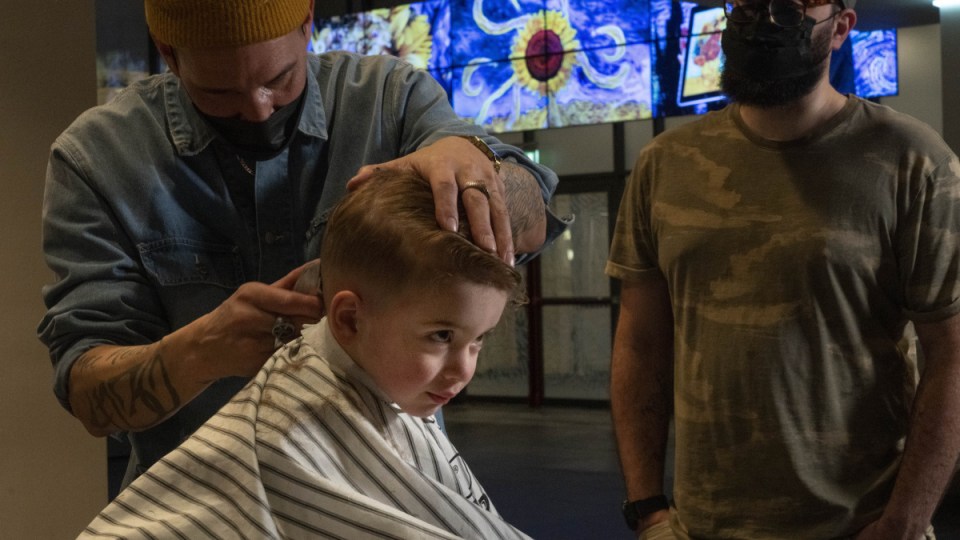 Three-year-old Ole van Santen gets a haircut at the Van Gogh museum in Amsterdam. Photo: AAP

More than 70 theatres, museums and concert halls in the Netherlands have opened their doors in light-hearted defiance of the country’s anti-coronavirus regulations, repurposing each venue to highlight the inconsistency of the rules.

Some stages were transformed into hairdressing salons while others became yoga studios for the day in a protest action called Hair Salon Theatre, the brainchild of the well-known Dutch actor and cabaret artist Diederik Ebbinge.

Theatre operators were protesting the inconsistency of laws that allow people to go shopping but not to visit museums. They also permit hairdressers to receive customers but force theatres to remain closed.

A hard lockdown in the Netherlands, imposed due to rapid spread of the Omicron wave, ended on Saturday. But cultural institutions and restaurants have been ordered to remain closed.

In one particularly unusual case, the Van Gogh Museum in Amsterdam was transformed into a hair and beauty salon where customers could have their nails filed while enjoying priceless masterpieces by Vincent van Gogh.

“We want to emphasise that it is safe to visit the museum,” museum director Emilie Gordenker said.

In one Amsterdam theatre, the 200 hair-dressing appointments were sold out within minutes, perhaps as popular cabaret artists were due to perform while customers got their hair done.

At Amsterdam’s famous Concertgebouw concert hall, visitors were even able to get their hair cut while listening to a full orchestra performing just for them.

Mayors across the country expressed their sympathy for the protests but nevertheless intervened.

Some theatres were forced to continue their action outdoors while others received an official warning.