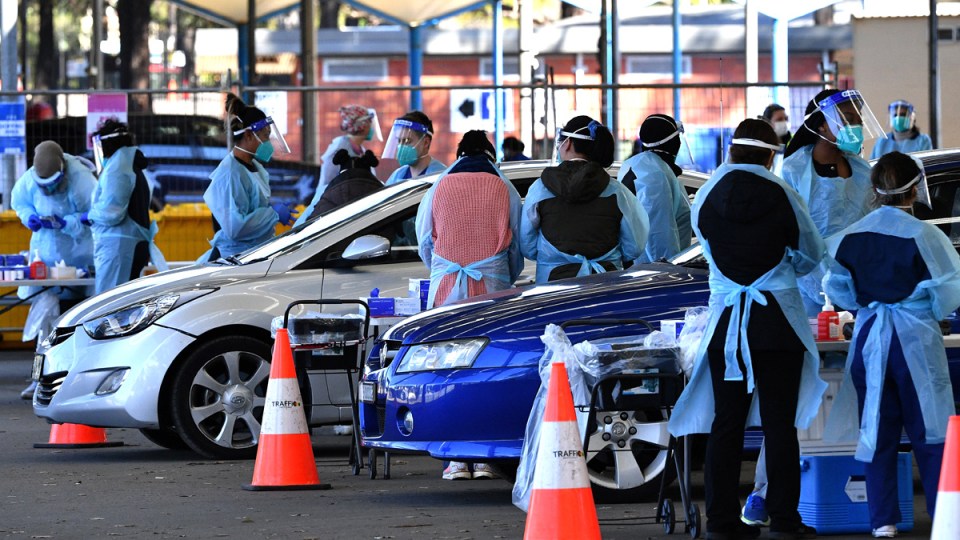 As Australians gathered to celebrate Christmas the COVID virus kept right on working, setting a new record of 6394 daily cases in New South Wales while continuing to make four-figure inroads in Victoria.

The official NSW number, high as it is, probably underestimates the true picture because some 40,000 fewer tests were conducted, the number dropping to 109,545 due to Christmas Day.

In Victoria, where 1608 cases were confirmed, a similar doubt about the decline from more than 2000 cases on Friday is likely attributed to  testing stations that were closed for Christmas or operating under reduced hours.

There were no deaths reported in NSW on Sunday, but hospitalisations grew to 458, with 52 people in ICU.

The spiralling outbreak has for the past week swamped contact tracers and overwhelmed testing sites.

The situation has prompted the government to reintroduce some restrictions that had been wound back on December 15.

Masks are again required in indoor settings, with hospitality venues to return to the one person per two-square metre rule and QR codes to be compulsory again from Monday.

While no restrictions affected Christmas gatherings at homes on Saturday, those able to celebrate were encouraged to take precautions wherever possible.

Revellers were urged to take rapid antigen tests before gathering, prioritise ventilation and ask elderly visitors to sit outside on verandahs.

NSW is all but guaranteed to reach its goal of 95 per cent vaccination coverage.

Thousands of Victorians spent Christmas Day lined up at COVID-19 testing sites across the state, with bad news for 1608 who returned positive results.

Another two deaths were recorded while the number of active cases dropped from nearly 17,600 to 17,392.

There are 374 people in hospital, below the seven-day average of 381.

There are 77 patients in intensive care, five more than Saturday and 43 who are ventilated, up one.

The number of positive cases came from 72,519 tests processed on Christmas Day.

Masks will be a common site again at at the first day of the Boxing Day Test on Sunday.

The requirement was brought back on Friday for people older than eight years of age at all major events attracting more than 30,000 patrons. They can be removed while seated outdoors but must be worn while moving around in venues.

Masks are also required for entering hospitality and entertainment venues and offices.