Eligible Australians are racing to get their booster shot before the end of the year. Photo: Getty

Australians have been urged to put a booster shot at the top of their Christmas lists, with experts and state leaders calling on the government to shorten the wait between jabs amid rising Omicron cases.

But although there are plenty of Pfizer and Moderna vaccine doses to go around, not everyone can snag an appointment.

On Sunday, Health Minister Greg Hunt urged eligible Australians to get their booster before Christmas, if possible.

“There are over five million vaccines that have been placed with GPs, pharmacies, commonwealth and state clinics, so there is a very large volume that’s available,” he told reporters.

Mr Hunt added that more than 1.3 million booster shots had been administered already, with more than 640,000 of those in the past week alone.

However, the Australian Financial Review reports that among eligible Australians (people who were vaccinated five or more months ago), only half have received their third dose. 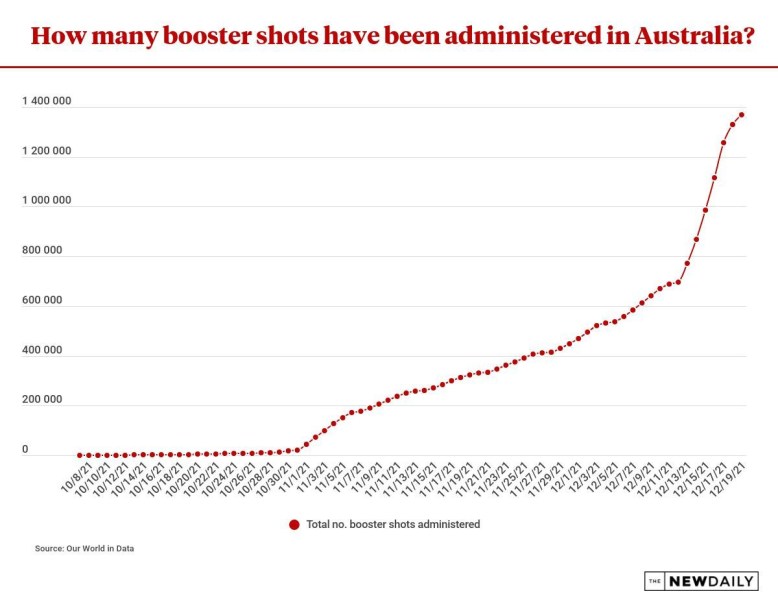 NSW Health estimates that 40 per cent of people will be eligible for their booster shot by the end of January, but some clinics are already fully booked for weeks.

“NSW Health contacts people who are registered in the NSW Health vaccination booking system with a reminder text message alert when they become eligible for their booster dose,” a spokesperson told The New Daily.

Many people in Melbourne and Sydney have complained that it’s difficult to book an appointment.

Booking websites like COVID-19 Near Me and the government’s Vaccine Clinic Finder show that although many clinics are fully booked until the new year, there are still spots available this week.

In Melbourne, the state government’s Royal Exhibition Building clinic and the drive-through clinic at Wyndham are even offering walk-in booster vaccinations until Christmas Day on Saturday.

“Getting your booster should be at the top of your Christmas list this year to keep your friends and family safe during the holiday period and slow the spread of the virus,” Victorian Health Minister Martin Foley said.

Before a national cabinet meeting on Wednesday, experts are calling on ATAGI, the Australian vaccine advisory body, to bring forward the interval between second and third shots so that more people can get their booster sooner.

NSW and Victoria will also use the meeting to lobby for a shorter interval between doses amid rising Omicron cases in both states.

Professor Raina MacIntyre, head of the biosecurity program at the Kirby Institute at the University of New South Wales, said third doses should “absolutely” be brought forward to an interval perhaps as small as two months.

“Australians are sitting ducks with only two doses, and waiting five to six months means the Omicron epidemic will peak with only a small fraction of Australians optimally protected with three doses,” she said.

“That is why other countries are shortening the interval.”

Professor Fiona Russell from Murdoch Children’s Research Institute in Melbourne said AstraZeneca recipients and healthcare workers should be able to get their booster shots within three months, if they haven’t already.

“The majority of people who received AstraZeneca are over 60 years and/or clinically vulnerable,” she said.

A spokesperson for the Department of Health, of which ATAGI is a part, told TND that nothing had changed from the previous statement more than a week ago, which called for boosters to be administered five months after the second shot.