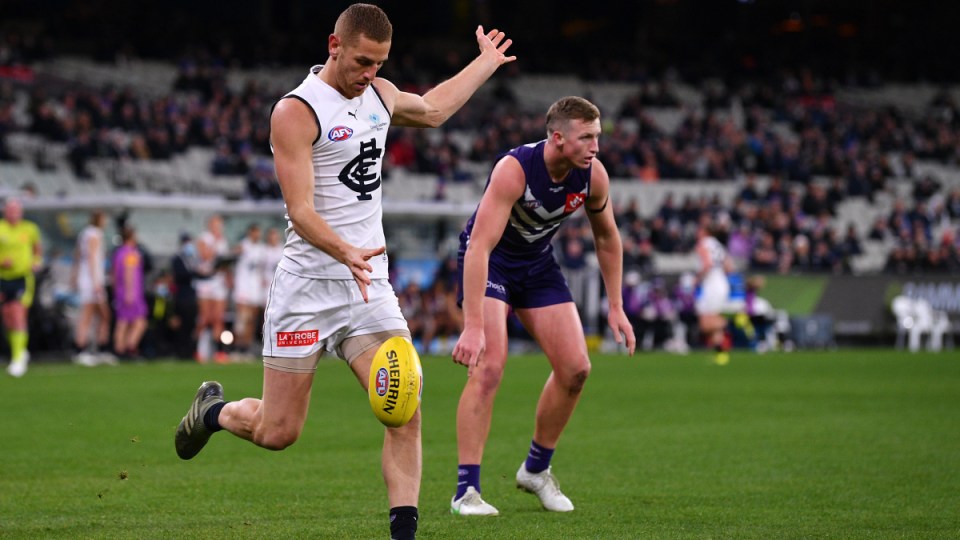 Carlton defender Liam Jones has chosen to end his AFL career just days after it was revealed he was unvaccinated for COVID-19.

The 30-year-old, who was contracted for 2022, cited “personal reasons” for his decision.

“I wish to announce my retirement from AFL football effective immediately,” Jones said in a statement released by Carlton on Sunday.

“I want to take this opportunity to thank all who have supported me throughout my journey, both personally and professionally.

“I love the game and I’ll miss my teammates.”

Liam Jones has announced his retirement.

Under the AFL’s vaccination schedule and Victorian state government mandate, men’s players must have had their second shots by November 26 to continue as part of their clubs’ programs.

Jones, who played 161 games for Carlton and the Western Bulldogs over 12 seasons, was due to return to training with the Blues on December 6.

Carlton head of football Brad Lloyd indicated Jones had been weighing up his decision for some time.

“We have been in constant dialogue with Liam in recent months and allowing him the time he needed to make an informed decision regarding his playing career,” Lloyd said.

“Liam confirmed with us today (Sunday) that he has made the decision to retire, and his wish for the specific reasons of that decision to be kept private.

“As a club, we will be respecting that.”

Liam Jones has today made the decision to announce his retirement.

We wish him all the best and thank him for his time at the Club.

The Club will now work closely with the AFL regarding options available to replace Jones’ spot on the list for the 2022 season.

After an inconsistent start to his career, Jones had enjoyed a strong run of form in the Blues’ backline in recent years.

He shaped as an important player in their bid to break their finals drought next season under new coach Michael Voss.

Caleb Marchbank, Oscar McDonald and Brodie Kemp now loom as Jones’ most likely replacements in the backline alongside No.1 defender Jacob Weitering.

Jones’ retirement call comes after Adelaide AFLW premiership player Deni Varnhagen was moved to the Crows’ inactive list earlier this month because of her anti-vaccination stance.

Unlike Varnhagen, who works as a registered nurse and has been outspoken in her position, Jones has not spoken publicly about his views.

“I hope that people respect my decision and privacy,” Jones said.

“Neither myself or my management team will be making any further comment on the matter.”