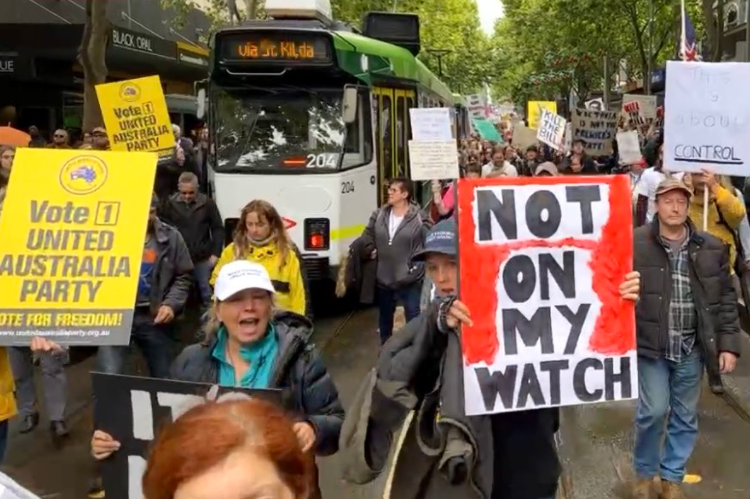 Protesters march through Melbourne's CBD on their way to Parliament House. Photo: Twitter

Thousands have marched through central Melbourne in the largest protest so far against pending pandemic laws that would give politicians the right to impose pandemic restrictions that critics have denounced as legislated tyranny.

Protesters blocked tram lines and forced public transport to be rerouted as they marched from the State Library to Parliament.

One man was seen carrying a homemade gallows with three nooses – an apparent reference to the three upper house independents whose votes can pass the Emergency Bill into law.

The rally drew the biggest crowd so far to what was the third in the series of Saturday protests, with organisers estimating the crowd, which stretched from Spring Street to Elizabeth Street, to be in excess of 20,000.

With another protest set for next weekend, Reignite Democracy’s founder Monica Smit hopes to see that number doubled on November 20. Ironically, Ms Smit was unable to attend because of bail conditions imposed after an earlier arrest.

Unlike earlier anti-lockdown demonstrations, there were no reports of unrest or violence, with some police seen handing out water bottles to marchers.

“We are being governed by medical bureaucrats that are part of a mad, insane cult of vaccinists,” he told the rally.

As of Friday, just under 93 per cent of Victorians aged 12 and over had received at least one vaccine dose and 86 per cent both.

The deadline for construction workers to be fully vaccinated to continue working on site has been reached.

The controversial vaccine mandate, which sparked violent protests across Melbourne in September, requires all tradies to have had two vaccine doses by Saturday.

Victorian aged care workers must be fully vaccinated by Monday and about one million of the state’s essential workers in total will be required to be double-jabbed by November 26.

Anyone with a valid medical exemption will be able to continue working.

“I would encourage Victorians to fight on every level against Daniel Andrews’ terrible pandemic bill … but they should make their views known in a peaceful and calm and sensible way,” he told reporters.