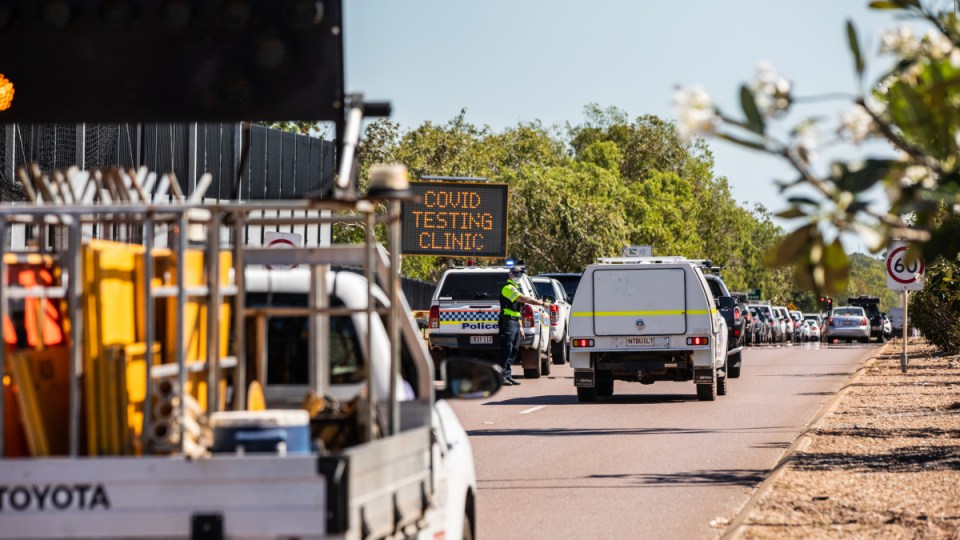 There have so far been no new COVID cases in the NT's cluster of three. Photo: Getty

The Greater Darwin lockout of unvaccinated people has been extended as authorities race to find people potentially exposed to COVID-19 during the Northern Territory’s first community outbreak.

The Northern Territory government is also set to impose new health restrictions for 54 remote Aboriginal communities where less than 70 per cent of the population has had one COVID-19 vaccine dose.

Anyone entering those communities from outside the NT, Darwin, Alice Springs and Katherine from November 19 must return a negative virus test 72 hours before entry.

They will also need to wear a mask in public areas for seven days from Monday, with testing of symptomatic residents stepped up.

The new rules were mandated after Doherty Institute modelling set a higher benchmark for remote communities and the previous 80 per cent double dose target was extended to include people aged five to 11.

No new cases were recorded on Monday but health workers remain concerned after a traveller who brought the virus to the Top End came clean about her movements.

“It has taken a lot of time to fully corroborate her story,” Chief Minister Michael Gunner said on Monday.

“However, we believe there may be unknown contacts and we are particularly concerned with doing more contact tracing work on the Noonamah hotel exposure site.”

Mr Gunner said the 21-year-old woman spent four hours at the site on Melbourne Cup Day, and only 47 of the 350 patrons at the venue checked in.

“The lack of check-ins has greatly increased the workload for our contact tracers,” Mr Gunner said.

The Cup Day event has also forced the lockout in Greater Darwin to be extended by 24 hours to 11.59pm on Tuesday.

Health restrictions were imposed in Greater Darwin and Katherine, 320 kilometres to the south, late Thursday after an unvaccinated man in his 20s contracted the virus without leaving the NT.

Katherine was fully locked down, along with unvaccinated people in Greater Darwin, until the source was found to be the woman who had flown to the NT from Cairns.

She had also visited South Australia and Victoria before lying on her NT border entry form and spending two nights with the index case at a Darwin hotel.

She was fined $5024 on Sunday, when the full lockdown in Katherine was eased to a lockout of unvaccinated people.

The lockdown has ended in that town, but face masks must be worn in most public venues.

The NT cluster has three cases and all the infected people are in quarantine at the National Centre for Resilience.

Only unvaccinated people who haven’t had two jabs are locked down.

Fully vaccinated people are able to move about the community and all businesses are permitted to remain open if their staff are vaccinated.

The NT is calling this a lockout because a vaccine certificate must be shown before people can enter premises.

Locked down people can leave their homes for the five essential reasons.

The lockdown of only unvaccinated people has seen the NT vaccination rate soar in recent days with thousands of people jabbed since the outbreak started.

NT Health says 91 per cent of the Territory’s eligible population has now had one dose of the vaccine and 78 per cent are fully vaccinated.

That’s a big increase from a fortnight ago when just 78 per cent of the eligible population had been given their first dose and 65 per cent were fully vaccinated.