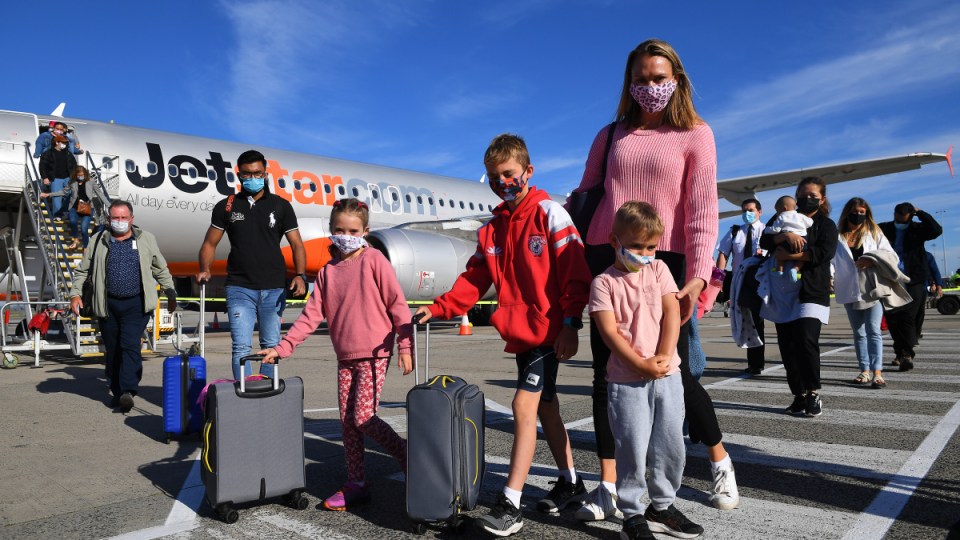 Melbourne has welcomed interstate visitors, ahead of overseas arrivals, with no quarantine needed. Photo: AAP

Victoria has recorded 1471 new COVID-19 cases and four deaths as the state welcomes its first batch of quarantine-free international travellers since the start of the pandemic.

The figures, confirmed by the health department on Monday, bring the total active infections to 21,959 and the toll from the latest outbreak to 309.

There are 699 people battling the virus in hospital, including 136 in intensive care, of which 86 are on ventilators.

There were 46,065 Victorians tested on Sunday and 14,413 vaccine doses administered at state-run hubs.

Fully vaccinated international arrivals touching down in the state from Monday will no longer have to undergo 14 days in quarantine, as long as they provide a negative COVID-19 test within 72 hours of departure and another 24 hours after arrival.

A flight from Singapore is due to land at Melbourne airport on Monday morning, the first of five international planes scheduled across the day.

Children aged under 12 arriving with fully vaccinated parents and people with a valid medical exemption also won’t need to quarantine.

Victoria won’t cap the number of fully vaccinated returning Australians entering the state, but unvaccinated people and international arrivals who don’t meet the criteria will be limited to 250 per week.

The same change is also happening in NSW from Monday.

In a move that will ramp up domestic flights along the usually busy Melbourne-Sydney route, restrictions have also been lifted on travel between Victoria, NSW and the ACT from Monday.

Krista Kim from Point Cook, whose father died from COVID-19, had an emotional reunion with her Sydney-based daughter Phillipa and her two granddaughters Selma, 2, and Kimiya, 5.

“I just recovered from a heart attack 10 days ago. It’s really special,” she told reporters.

She is expecting her other daughter to arrive from Amsterdam on Tuesday.

Phillipa was meant to see her sister just before COVID-19 hit and now hasn’t locked eyes with her in four years.

“We’ve both got two extra children that we’ve never met. So much has changed so it’s a big deal,” she told AAP.

Melbourne Airport chief executive Lyell Strambi said it was a terrific day for Australians wanting to return home from overseas and there was a buzz in the airport for the first time in months.

About 20,000 people usually work at the airport each day but that figure dropped to as low as 500 at various stages during the pandemic.

“We were one of the first industries into the crisis. It’s been around 20 months for us and, in fact, we had our lowest day, only two weeks ago. So it’s not as if it’s been smooth sailing. It’s been awful,” he said.

Bouquets of flowers await passengers when they step off the Singapore flight on Monday morning.

Melbourne airport is expecting five international flights to land across the day, with about 300 to 400 passengers arriving and departing.

By Christmas time the airport is counting on about 34,000 seats available a week, including internationally, while domestic traffic at Melbourne airport will rise to 50 or 60 per cent of pre-pandemic levels.

Jetstar captain Narele Cooper, who has 30 years experience as a pilot, said it was exciting to see fights ramping up and a full plane of passengers after a tough time for her industry.

“We’ve had a lot of stand downs, a lot of really tragic stories,” Ms Cooper said before jumping back in the cockpit on the return flight to Sydney.

She is keen to see her sister in Melbourne and brother on the NSW north coast.

“It’s just exciting to have … our lives back to normal,” the pilot said.