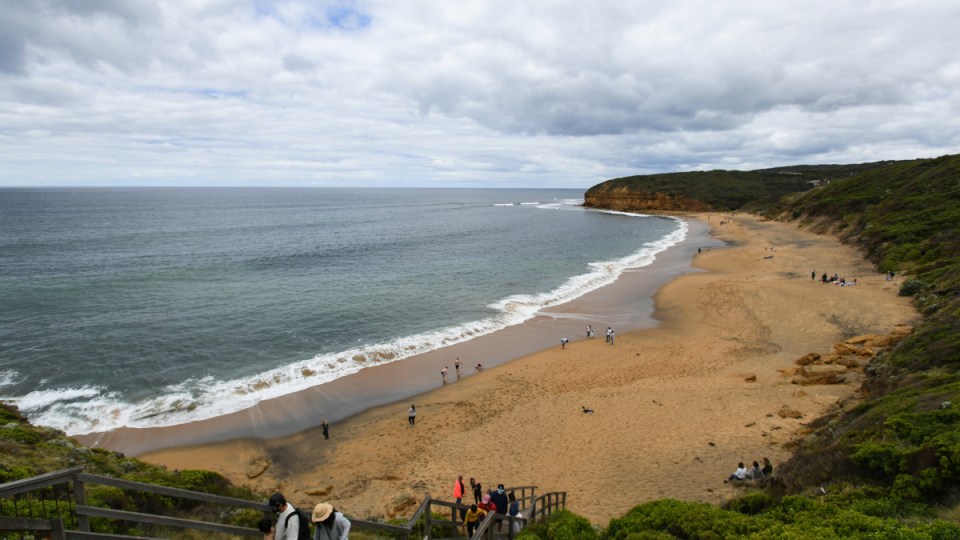 Travel to Victoria's regions will be allowed from 6pm on Friday. Photo: AAP

Melburnians are expected to flock to Victoria’s regions for an unofficial long weekend as statewide travel resumes and more COVID rules ease within hours.

The state had another 1656 local virus cases on Friday, down on the 1923 reported on Thursday.

There were also another 10 fatalities, with the toll from the current COVID outbreak rising to 282.

The number of virus patients in Victorian hospitals has fallen further, down to 738 from 746 on Thursday.

Vaccination rates continue to climb in Victoria, ahead of the metro-regional border reopening from 6pm on Friday, paving the way for a mass exodus from the city.

By Friday morning, 91.46 per cent of over-16s were partially vaccinated, with 78.75 per cent full vaccinated.

Creative Industries Minister Danny Pearson said the state would hit its 80 per cent vaccination target at the weekend, but restrictions would ease regardless.

“Either way, the eased restrictions will be coming in tonight to ensure Victorians can make the most of this great long weekend,” he said from the stage of the Sidney Myer Music Bowl, ahead of a concert on Saturday night.

With Friday’s rule changes, it’s feared there will also be traffic chaos, with thousands fleeing the city for the unofficial Melbourne Cup long weekend. That is likely to be exacerbated by wild storms that hit Victoria late on Thursday and into Friday, leaving thousands without power and trees fallen across many roads.

On Thursday, Victoria Police Chief Commissioner Shane Patton indicated anyone planning to get an early start to the long weekend was unlikely to be penalised.

“Rather than everyone heading off … at the six o’clock starting line, if it was a fraction earlier we’re not going to be very worried about that,” he told Melbourne’s 3AW radio.

In other restrictions to ease in Victoria on Friday, masks will no longer be needed outdoors, indoor entertainment venues, gyms and shops can reopen, and capacity limits increase for restaurants, pubs and cafes.

Outdoor events including weddings and funerals will be able to host 500 fully vaccinated people, while outdoor community sport can resume.

“Tonight, our bright metropolis in our great state comes back to life,” Mr Pearson said.

“Six o’clock tonight is dividend day, it’s a time where we can start to get back and recapture some of the things that we’ve been missing so much over these last 19 months.”

“All of these things are essentially only possible because of the vaccination coverage that we’ve been able to get to,” he said.

“Vaccines have gotten us to this point and they’re going to get us to all the additional opening steps that we’ll get to.”

Professor Sutton said the state was on track to be among the “top five” vaccinated jurisdictions in the world, with 65.5 per cent of all Victorians, which includes children under 12 who are not eligible for a COVID-19 vaccine, fully vaccinated.

“That’s a higher vaccination rate than the US, Austria, Switzerland, Hong Kong and Israel,” he said.

He said 78.3 per cent of all Victorians have had at least a single vaccine dose, “overtaking the UK, France, Germany, Belgium, Sweden and Japan just to name a few”.

With greater capacity and intrastate travel allowed, tourism-starved regional operators are preparing for a busy weekend.

Bells Beach Brewing co-owner Adam Smith expected his Torquay and Geelong venues to be full and said at least one group of about 30 was making the trip from Melbourne.

“It will almost be like a teary reunion on Saturday when they come in,” he said.

Meanwhile, Victoria will also tightening medical exemption rules for COVID vaccinations from 6pm on Friday, in a crackdown on people doctor shopping and pressuring GPs.

Victorian cases fall ahead of long first weekend of freedom