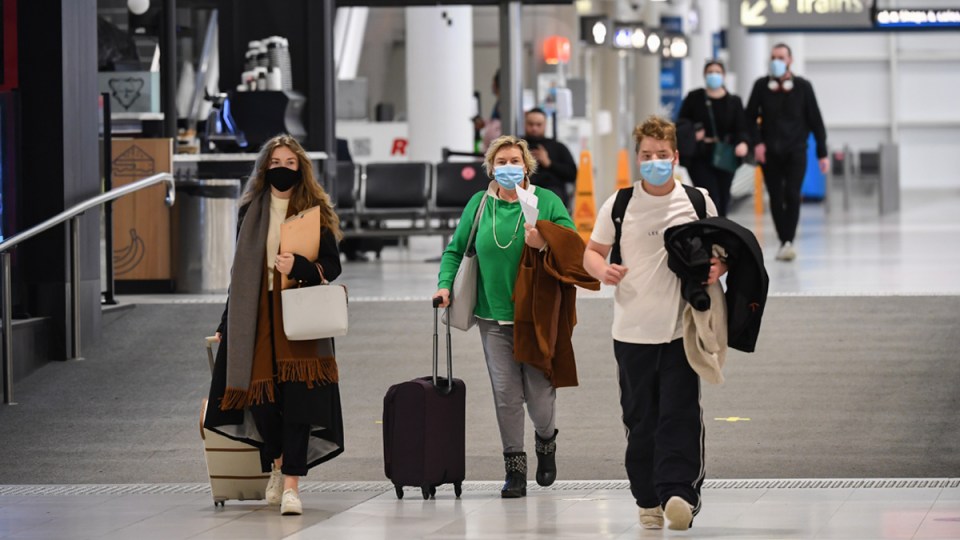 The CDC raised its travel recommendation to "Level Four: Very High" for 22 nations and territories, including Australia. Photo: AAP

The number reported on Saturday is a slight drop from the previous day’s tally of 345.

The number of people in hospital also dropped, to 469 from 482, with 123 people in intensive care.

Meanwhile, NSW residents can begin jetsetting internationally in just over a week, as airlines prepare for huge demand once international travel resumes.

Qantas CEO Alan Joyce said the airline had seen a “phenomenal reaction” and “massive” demand in light of its decision to move forward flights.

A large number of flights sold out in a few hours, and international sales have been exceeding domestic ones, he said on Friday.

The carrier will resume regular long-haul international services for the first time since March 2020 when a 787 leaves Sydney bound for London on November 1.

Qantas flights out of Sydney to Singapore, Fiji, South Africa, Phuket and Bangkok were brought forward and will each resume by January.

The decision was made possible by Premier Dominic Perrottet’s call to walk away from quarantine for international arrivals from November 1, Mr Joyce said.

The CEO thanked Mr Perrottet on Friday for “moving to what every other global city in the world has moved to” – quarantine-free travel – “that has given NSW a leading advantage and has made NSW our gateway to the world”.

The Premier confirmed his intention to open up as quickly as possible, saying the resumption of international flights offered hope.

“There is change coming, and it’s a turning point in this pandemic,” Mr Perrottet said.

More than 92 per cent of NSW residents aged 16 and over have received at least one vaccine dose, with 83.7 per cent fully vaccinated by Thursday.

NSW Education announced late on Friday evening seven schools had been closed with immediate effect ahead of deep-cleaning and contact tracing.

Staff and students from public schools at Albion Park, Auburn North, Curl Curl – including the Curly Kids out of school hours facility – Garden Suburbs, Green Hill, Hinchinbrook and Manning Gardens have been advised to self-isolate and follow NSW Health protocols.