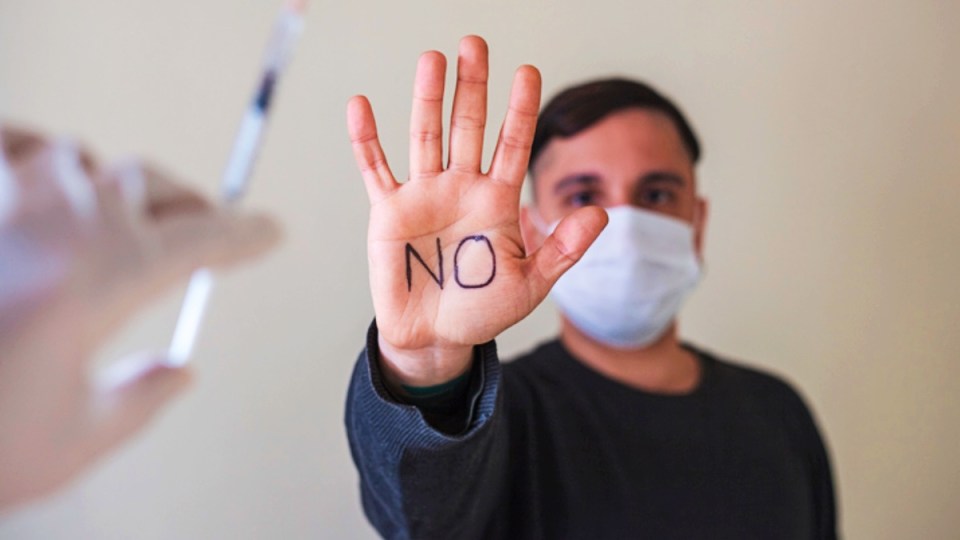 Humans are unable to face the stark reality of death, and often engage in various forms of denial. Photo: Getty

Vaccines save lives, and have been doing so since the development of the smallpox vaccine more than 200 years ago.

However, for vaccines to keep entire communities safe they need to be taken up by very large proportions of the population.

Only then can the vaccinated offer protection to the unvaccinated, known as “herd immunity”.

Unfortunately, too often this doesn’t occur.

Hesitancy around the measles vaccine, for example, contributed to a 30 per cent increase in cases globally in 2019.

So, why does vaccine hesitancy occur? There are many reasons, and these will differ between people.

But, as clinical psychologists who study anxiety and avoidance, we think one big factor is fear – specifically the fear of death, and how we manage that fear.

Vaccination rates increasing, but fear still out there

According to the World Health Organisation, vaccine hesitancy is one of the 10 leading threats to global health.

In the case of COVID, refusing or delaying vaccination has been a significant problem, with anti-vax and freedom marches dominating news cycles over recent months.

In Australia, the issue of vaccine hesitancy remains significant, despite some reports to the contrary.

Vaccine rates are on track to reach 85 per cent or even more than 90 per cent in many parts of the country.

And last month a Sydney Morning Herald survey showed only 9 per cent of adults indicated they were unlikely to get vaccinated).

The article also claimed “vaccine fears have plunged to a record low”.

However, while the data were real, in our view, the interpretation of them was flawed.

Instead, mandatory vaccination of certain groups in the community, and significant disadvantages for those who refuse to be vaccinated, is driving increases in vaccination uptake.

In several Australian states, mandatory vaccinations are in place for many professions, including quarantine workers, health workers, teachers, construction workers, aged-care workers and other groups.

When you need to work to put food on the table, the decision to stay unvaccinated can become an impossible one.

What’s more, politicians have foreshadowed various freedoms for the vaccinated.

For example, the freedoms currently afforded to fully vaccinated Sydneysiders, but not the unvaccinated, include: Visitors to your home and access to gyms, pools, retail stores, hairdressers, nail salons, pubs, zoos, cinemas, theatres, museums and galleries.

So why do people delay or refuse to get vaccinated?

The WHO lists complacency among the leading reasons for vaccine hesitancy.

But how can this be the case? After all, COVID has already killed nearly five million people globally and infected more than 240 million.

In the face of these numbers, how could anyone remain complacent?

Why do we see unmasked protesters, apparently oblivious to the threat?

The psychological theory that best explains these behaviours is “terror management theory“. According to this theory, humans are unable to face the stark reality of death, and often engage in various forms of denial.

We see ourselves as grander than the animals, immune to many of their problems, and destined for immortality with our gods.

As one group of researchers put it, humans could not function with equanimity if they believed that they were not inherently more significant and enduring than apes, lizards, or lima beans.

Hundreds of studies in social psychology laboratories have shown that subtle reminders of death (known as “death primes”) lead participants to vigorously defend their religious and cultural beliefs, and their freedoms.

When reminded of death, participants even show aggression towards those with different political or religious ideologies. We cling to our “rightness” and “specialness”, to help assuage our terror of death.

In the process, we may defy the warnings of modern medicine, convinced of our own superiority.

Researchers at the University of Chicago Divinity School reported half of their participants, all of whom indicated some religious affiliation, agreed with the statement “God will protect me from being infected”.

To cope with our dread of death, we delude ourselves into thinking we are invincible: Death might happen to other people, but not to me.

This effect will be magnified even further if the social groups to which we belong also endorse similar views.

Reminders of death lead people to fiercely defend the values and beliefs of their group.

In the context of COVID, this means we may become more individualistic, more distrustful of science or government, or more trusting in our god’s ability to protect us, if these attitudes are valued and shared by our culture or subgroup.

Living in the times of COVID has made us all participants in a social psychology experiment. Daily death counts and case numbers are regular reminders of death that have produced all the behaviours we see in the laboratory.

These include denial of risk and aggression against those who are different from us. For example, the racism against people of Asian appearance when the pandemic began.

Early deaths associated with the vaccines themselves became another “death prime” that drove additional caution and avoidance.

Vaccine hesitancy will remain an urgent problem globally while we refuse to see ourselves for who we really are.

As COVID continues to mutate, the speedy uptake of vaccines may remain a pressing issue over coming years.

Vaccine hesitancy will continue to kill tens of thousands globally until its roots are fully understood and confronted.

Why do some people delay getting vaccinated or pretend COVID doesn’t exist? Paradoxically, denial of death