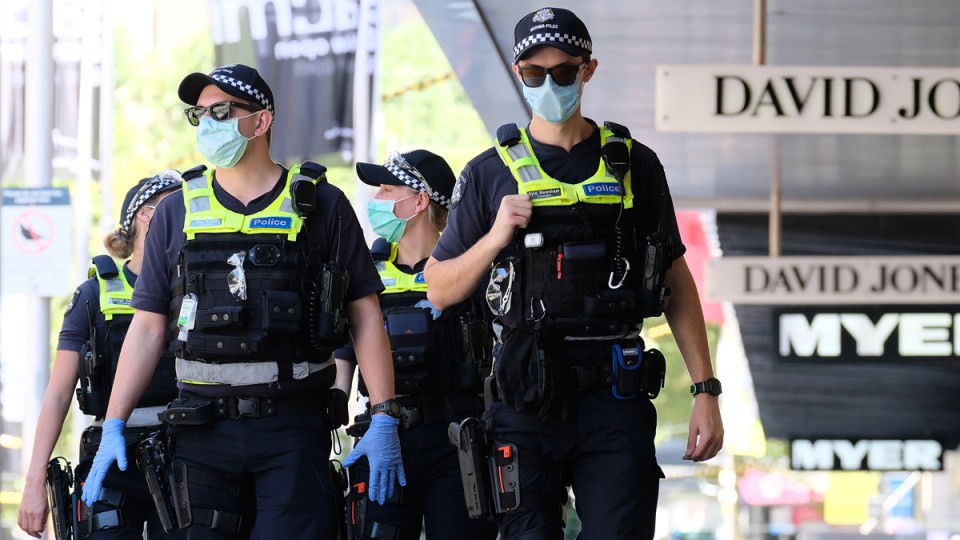 VicPol continues to stop Melburnians on the street and inspect their papers. Meanwhile, Sydneysiders can fly south and go anywhere they like. Photo: AAP

The situation means somebody in Sydney can travel nearly one thousand kilometres to visit a pub in Lorne but residents of the Victorian capital can’t even see family members in suburbs further than 15kms from their homes.

As Mr Frydenberg noted, those restrictions remain despite vaccination rates rapidly rising across the southern state, with close to 88 per cent of people having received a first dose and 64 per cent a second.

“The people of Victoria should be congratulated. They have done the hard yards and they are doing the right thing,” Mr Frydenberg told journalists in Melbourne on Saturday.

“Now they should be given their freedoms and their lives back.”

The Treasurer says Melbourne’s long-running lockdown has been anxiety-provoking, as evidenced by the numbers of teenagers turning up at emergency departments with mental health issues.

Meanwhile he has reiterated that federal COVID disaster payments will come to an end when Victoria hits 80 per cent full vaccination, just as they have and will do in NSW.

Mr Frydenberg would also like to see Victoria follow the lead of its northern neighbour and reopen to the rest of the world on November 1.

Australia will scrap quarantine for international arrivals into NSW but initially limit the new arrangements to citizens, permanent residents and their immediate families.

The NSW government made a shock decision on Friday to announce isolation requirements would be scrapped from the beginning of next month.

He denied NSW Premier Dominic Perrottet had been hasty to suggest tourists could return under the arrangements.

“The premier understands that’s a decision for the commonwealth government, not for the state governments,” he told reporters in Sydney.

“When we believe that is a decision to make, we will make it at that time.”

Arrivals will need to be fully vaccinated and return negative tests before and after their flight.

The definition of immediate family will be expanded to include parents, rather than just partners and children.

All Australians will also be allowed to leave the country from the start of November without having to receive special permission.

Qantas will bring forward the resumption of international flights two weeks to November 1.

NSW reported 319 new local infections on Saturday, while case numbers in Victoria continue to soar with 1993.

There were seven deaths in Victoria including a 15-year-old girl with other health conditions. NSW reported two fatalities.

Australia has fully vaccinated more than 66 per cent of its eligible population aged 16 and over, while around 85 per cent have received their first dose.

Health Minister Greg Hunt on Saturday said almost two million vaccinations had been administered in the past week and Australia had passed 32 million doses overall.