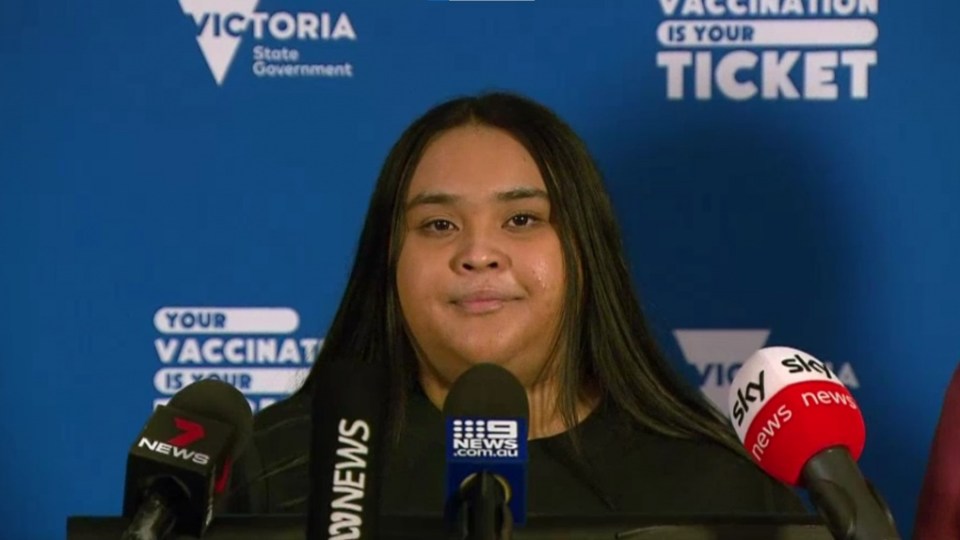 Saela, 17, spoke about her month-long battle with COVID-19 on Wednesday. Photo: Supplied

A 17-year-old who almost died from COVID has urged young Victorians to get vaccinated, despite fears her powerful message could make her the target of anti-vax trolls.

Saela, a year 11 VCE student from Broadmeadows in Melbourne’s north, shared her traumatic experience with coronavirus on Wednesday, detailing the month-long battle she and her family faced after contracting the virus.

So great was the fear of distortion of Saela’s message, her mother was forced to confirm at the press conference the two were not crisis actors.

It came after another young Victorian was attacked online by conspiracy theorists and anti-vaxxers last week after sharing his personal experience of the illness, and a plea for people to get vaccinated.

Victoria reported its deadliest day of the Delta outbreak yet on Wednesday, with 13 deaths taking its toll to 114. There were also another 1571 local virus cases, up from 1466 on Tuesday.

In late August, eight members of Saela’s family, including herself and her mother Michelle, contracted COVID-19 from her little sister, who picked it up at childcare. At the time, Saela was ineligible for the vaccine. (Neither Saela nor Michelle gave their surnames.)

Saela spent a month in hospital, including 15 days in intensive care at Box Hill Hospital. She was initially diagnosed with pneumonia before worsening symptoms required her to be “put to sleep” for nine days, and given a tracheotomy to survive.

In an emotional statement, Saela said COVID had given her coughing fits that left her breathless, but she and her family were initially more worried about her grandparents.

But in the second week of her COVID-19 symptoms, Saela’s health deteriorated further, and she was taken to hospital by ambulance.

Her condition had become critical as her lungs filled with fluid.

At one point she was the youngest person in the state on a ventilator because of the virus.

“I felt so many needles, I couldn’t catch my next breath, there was so much commotion around me and I didn’t know what was going on. I was so scared, I was screaming and I thought I was going to die,” Saela said.

“I had a tube coming out of my neck, I couldn’t move, I couldn’t talk, I was scared to sleep again.

“I just stared at the ceiling and I was alone. There was so much (sic) machines around me, so many wires and needles, so much beeping and everything made me scared. I was broken. None of this was fair.”

ABC News presenter Joe O’Brien called the mother and daughter’s story “the most powerful moment we’ve seen in any media conference” throughout the pandemic.

But he noted how sad it was that in these “twisted times” that Michelle had to explicitly say she was not a paid actor.

“We’re not actors. This is not a script … she wanted to share her story … maybe anonymous people online will try to make her feel bad for speaking out. But they should know nothing will make her feel worse than COVID did,” Saela’s mother said.

As each day passed, Saela’s health improved. She was released from the hospital a few days before the AFL grand final.

“There are a lot of people my age who think they are invincible and don’t need the vaccine. They think they are young, they don’t have underlying conditions, they won’t be affected, but COVID almost killed me,” she said.

“I don’t want anyone my age to have to lie in a hospital bed and tell their family ‘I’m sorry I did not get vaccinated in time’.”

Saela said physically and mentally she remained less than 100 per cent. She is still having physiotherapy to help her recovery.

Michelle said her husband was also seriously ill with the virus, to the point of coughing up blood. He was also taken to hospital by ambulance.

“I started to grieve. I thought someone was going to die and it was much easier for me to prepare for a loss than to hope,” she said.

Her fully vaccinated parents, for whom the family had been most scared, had only minor infections.