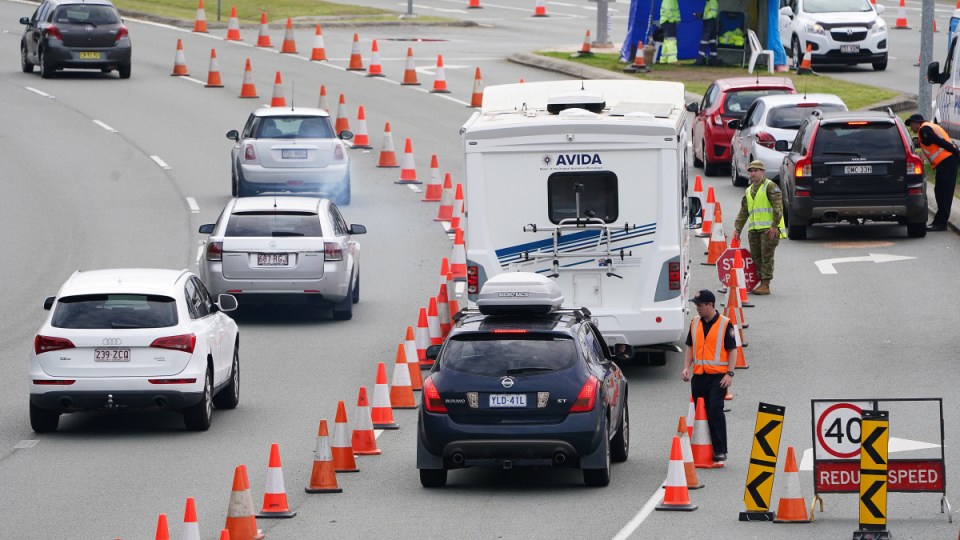 Queensland wants to see the final analysis of suppression measures before reopening its borders. Photo: AAP

Queensland’s chief health officer “hopes to see” widespread home quarantine in the state by December, with a trial starting next week.

From Monday, 1000 people who have applied to enter Queensland from interstate hotspots have been offered the chance to go into 14 days of home, rather than hotel, quarantine.

The trial is being offered only to Queensland residents currently interstate, and it won’t be offered to those who opt to travel to hotspots.

Chief health officer Jeannette Young said if the trial was successful, widespread home quarantine could be implemented by December.

“I hope to see [it], but let’s wait, let’s not jump ahead of ourselves,” she said on Thursday.

“We’ve got a trial starting on Monday with 1000 returning Queenslanders and we will see how that trial goes, but I would strongly recommend that anyone who would like to be part of the process going forward; go and get vaccinated because you need to have had two doses of vaccine, plus an extra two weeks later.

“As we gradually do look at this if it is successful, that will be one of the criteria.”

Health Minister Yvette D’Ath said trial participants must have had at least two weeks since their second vaccination, a negative test 72 hours prior to travel and must live within two hours of Brisbane airport.

“If you can’t reside alone, then the whole household will need to quarantine. You will be bound by the testing and home quarantine checking system that we have put in place,” she said.

The home quarantine trial has been welcomed by thousands of Queenslanders stuck interstate and people from other states who are trying to move to Queensland.

But Queensland’s borders are set to stay closed to interstate virus hotspots until 80 per cent of eligible residents are fully vaccinated.

The Queensland government wants to see the final analysis of suppression measures used against the Delta variant of COVID-19 before reopening state borders.

Premier Annastacia Palaszczuk’s office said the national cabinet of federal, state and territory leaders had received only an “interim analysis” of some measures.

This is the modelling of testing, tracing, isolation and quarantine (TTIQ) measures used in NSW to deal with an outbreak of the more transmissible strain.

“National cabinet noted but did not yet endorse the interim analysis,” the leaders said in a statement on Friday.

State and territory leaders have also received an “interim update” on home quarantine trials in South Australia for vaccinated returnees.

But Queensland is waiting for the final analysis of that trial and analysis of a trial that’s set to begin in NSW.

The government is also waiting for further analysis, requested by national cabinet, of the impact of reopening on health networks.

“Queensland looks forward to seeing the completed advice from the Doherty Institute,” a government spokesperson said on Thursday.

Currently, 68.3 per cent have had one dose of a vaccine and 49.53 per cent are fully vaccinated.

As Queensland passed five million vaccines administered, the state had zero local cases of COVID on Thursday. There was one in hotel quarantine and five in a bulk carrier off Cape York.

There are 31 active cases in Queensland.