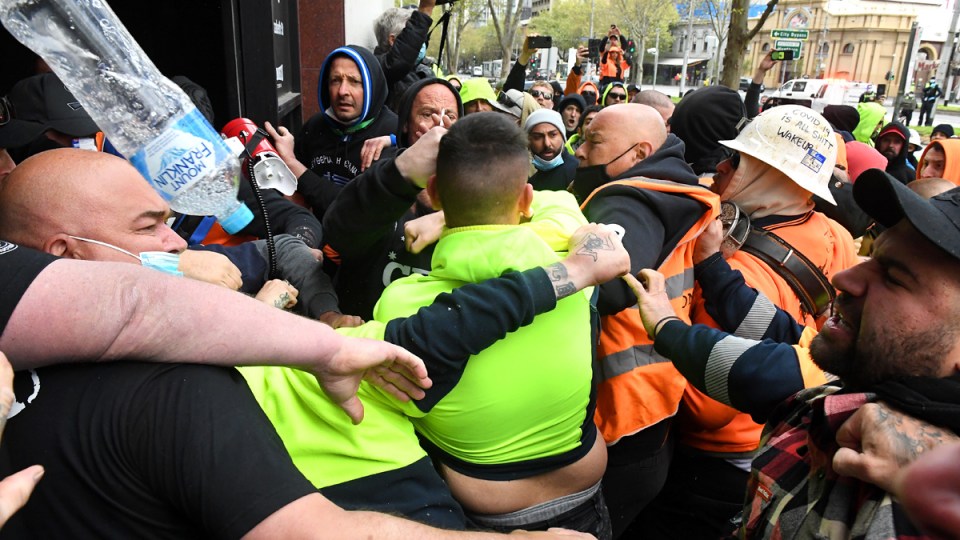 Victoria has another 1420 local virus cases and 11 deaths as the CFMEU prepares to expel members involved in violent protests outside its Melbourne office.

It is the most fatalities reported in a single day yet in Victoria’s current outbreak, and brings the toll to 68.

They were five men and six women from Melbourne’s north, west and south-east. They were aged from their 50s to their 90s.

Wednesday’s update follows Victoria’s national daily case record of 1763 on Tuesday, and is the seventh straight day the state has reported four-figure infections.

More than 71,000 Victorians were tested for the virus in the 24 hours to Wednesday morning, while 36,542 vaccinations were administered at state-run sites.

The latest figures come as cases linked to a “superspreader” event outside Melbourne’s CFMEU office grow.

Seven infections are now linked to the CFMEU headquarters protest on September 20, when demonstrators threw bottles at union officials and smashed the office’s door down in protest at mandatory vaccinations and other construction industry restrictions.

Victorian CFMEU boss John Setka said dozens of families and children had been affected, and officials were reviewing footage to identify members.

“There’ll be fronting the executive of the union and they’ll have to answer for their actions,” he told Nine’s Today on Wednesday.

“We’re not going to tolerate behaviour like that. Not against union members’ property … and then on top of that starting a superspreader, I mean it’s just absolutely unforgivable.”

It came as tens of thousands of VCE students returned to the classroom on Wednesday morning amid Victoria’s worsening outbreak.

“I’m pretty excited, it will be good to be back with my mates and spend some time together,” year 12 student Lucca Beaves told AAP.

But the 18-year-old was well aware of the likelihood his school, McKinnon Secondary College, in Melbourne’s bayside, might have to deal with a close contact or a positive case.

“I guess it’s a bit scary. If someone gets it at school, we won’t be able to keep going to class.”

Like so many senior students, Lucca and his twin brother Padua have spent much of their VCE studying at home.

After deciding to get the AstraZeneca vaccine back in August, they are waiting to get their second dose next week.

Tuesday’s return to school for year 12 students will be the start of just two weeks of face-to-face learning before exams.

State health authorities conducted a vaccination blitz for VCE students ahead of the return to school, with hubs set up on campuses in areas with high numbers of COVID-19 cases.

State school classrooms are being ventilation tested, and thousands of carbon monoxide monitoring units and high-efficiency particulate absorbing (HEPA) air filters are being installed in spaces with insufficient airflow.

On Tuesday, the state had another 1763 cases, the highest daily figure yet for any state or territory in Australia throughout the pandemic.

Meanwhile in regional Victoria, restrictions in the Latrobe Valley have been eased overnight, while Shepparton, Moorabool and Mitchell Shires remain in lockdown.

The Ferguson Report: Americans ‘vote 1’ for ballot-box apathy
Regional Victorian town out of lockdown while interstate spread has other residents on alert
Today's Stories