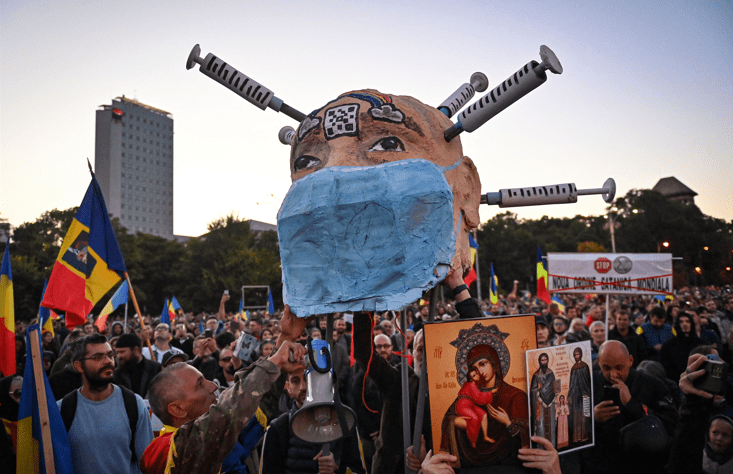 More than 5000 protesters have marched in Romania’s capital Bucharest to reject upcoming restrictions that authorities hope will combat an alarming surge of COVID-19 infections.

Daily infections in the European Union nation of 19 million have skyrocketed from around 1000 daily cases a month ago to 12,590 new cases on Saturday.

That was Romania’s highest daily number of infections since the pandemic started.

The new restrictions – expected to take effect in the next few days – will require people to wear masks in public and force shops to close at 10pm. Restaurants will remain open at half capacity but only for people with COVID-19 passes.

The protest on Saturday came a day after a deadly fire tore through an intensive care unit in a hospital in Romania’s port city of Constanta, killing seven COVID-19 patients.

The cause of Friday’s blaze is not yet known, but President Klaus Ioannis said that Romania had “failed in its fundamental mission to protect its citizens.”

The pandemic has highlighted the poor condition of Romania’s overstretched health care system. The Eastern European country has the lowest spending on health care of the European Union’s 27 nations relative to GDP at 5.2 per cent, compared to a bloc average of 10 per cent.

Romania has fully vaccinated only 33.5 per cent of all adults, making it the second-least vaccinated EU nation after Bulgaria. It has seen more than 37,390 confirmed virus deaths.