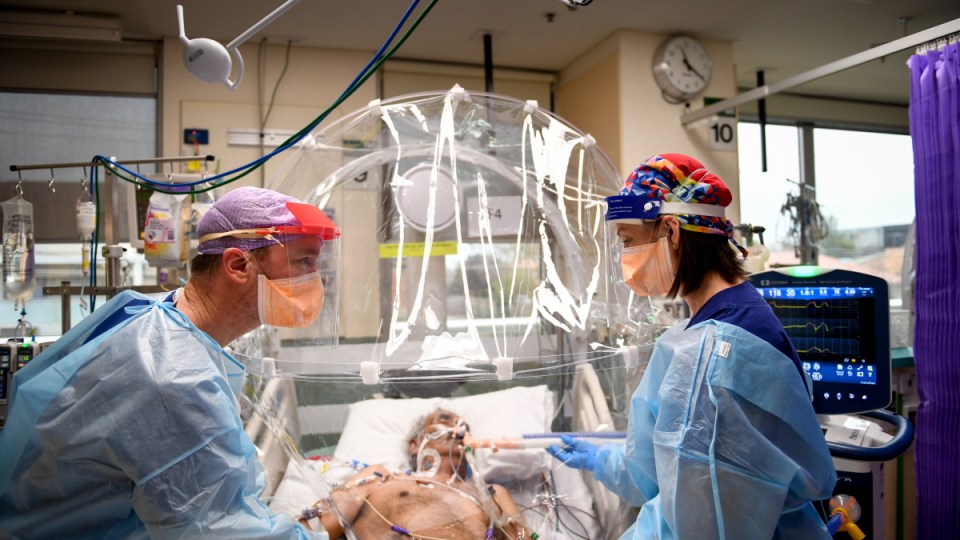 Intensive care nurses have made an impassioned plea for Victorians to get vaccinated, with COVID-19 patients in hospital set to soar this month.

She said patients were “begging” for the vaccine before being placed on life support, including a man in his 30s with no underlying conditions.

“I’ve seen it myself, they’re begging for the vaccination, they are very young, and once we get to that point where we are about to put them on life support, it really is too late,” she said.

Victoria reported 1220 new locally-acquired cases and three deaths on Sunday, with a man in his 50s, woman in her 70s and man in his 80s among the dead.

A record 71,275 Victorians were tested in the 24 hours to Sunday morning, while 36,248 vaccinations were administered at state-run sites.

There are 476 people in Victorian hospitals battling the virus, with 98 people in ICU and 57 requiring a ventilator.

Only five per cent of patients are fully vaccinated.

Ms Spence choked up as she described the lonely deaths in ICU for patients and implored Victorians not to delay getting the jab.

Jacqui Harper, nurse unit manager at the Northern Hospital, said nursing staff were holding up iPads so dying patients could farewell their family.

“The clinical deterioration is so sad. One minute sitting in a chair, an hour later, they could be saying their goodbyes,” she said.

He urged people to go online and re-book their second doses to help the state bring forward hitting its 70 per cent vaccination target, forecast for October 26, that will trigger the end of lockdown.

Melbourne is preparing to claim the unwanted title of the world’s most locked down city after spending 245 days under stay-at-home orders. It will surpass the record, set by the Argentinian city Buenos Aires, on Monday.

Mr Andrews said he was proud of the sacrifices Melburnians had made over the pandemic and called for them to make one final push.

“It’s only a few more weeks. We’ve just got to be vaccinated. That is the key not just to meet our targets but to have less people in hospital.”

Meanwhile, three Victorian students have tested positive ahead of Tuesday’s repeatedly rescheduled General Achievement Test and will be granted an exemption.

Nick Kyrgios is within touching distance of Wimbledon glory, but the road is daunting
ACT gains on COVID: Daily cases drop to 38
Today's Stories