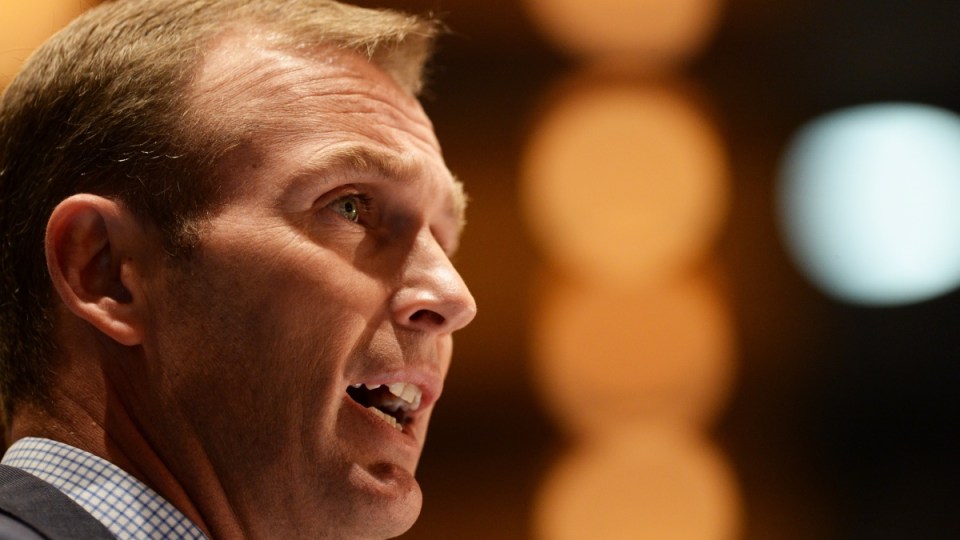 Rob Stokes praised his leadership rival Dominic Perrottet, but not too much. Photo: AAP

As the battle to replace Gladys Berejiklian as NSW’s premier begins, one of the top contenders has promised not to change the state’s lockdown exit plan if elected by his peers.

Ms Berejiklian announced her resignation on Friday after the Independent Commission Against Corruption disclosed the 51-year-old was under investigation for potential breaches of public trust.

She will also resign from parliament as soon as a byelection for her North Sydney seat of Willoughby can be held.

Ms Berejiklian will remain premier until the Liberal Party elects a replacement.

Planning minister and Pittwater member Rob Stokes, who has been described as a key ally of Ms Berejiklian, wants that to be him.

Speaking to reporters outside his home on Saturday, the 46-year-old said he’d been talking to colleagues about his leadership ambitions and was encouraged by the level of support so far.

Mr Stokes, who was first elected in 2007 and has also served as minister for environment and transport, is expected to go up against frontrunner, Treasurer Dominic Perrottet.

“I think Dom has strong claims to the job and he’s putting them out there … but I believe I have the qualities necessary to provide strong government into the future,” Mr Stokes told the ABC.

“I think I owe it to my community and to the people in NSW to at least provide them that choice,” he told 7News.

Modest praise for a rival

Mr Perrottet said on Friday he would speak with his family and colleagues over the coming days on “how I can best serve the people of NSW”, praising Ms Berejiklian as one of NSW’s finest premiers.

Mr Stokes also commended Ms Berejiklian on Saturday, expressing sadness over the end to her career and promising to abide by the roadmap out of lockdown that she unveiled only weeks ago.

“Gladys Berejiklian has provided an extraordinary example of leadership and of stability and it would be my intention to continue (the plan) as laid out, particularly in relation to the opening up,” he told the ABC.

Whoever succeeds Ms Berejiklian has a tough act to follow.

Prime Minister Scott Morrison led the tributes on Friday, lauding her “heroic” qualities and saying she was a “dear friend” and trusted by the community.

Even state Opposition Leader Chris Minns on Saturday thanked the premier, refusing to sink the boot into the Liberal Party over her demise.

“There’s plenty of time for politics … once the pandemic is over,” he told reporters.

“I cannot fault her dedication and hard work on behalf of the people of NSW, particularly over the past 15 weeks.

“I’m sure that her dedication on behalf of the people of NSW will not be forgotten.”

Meanwhile, supportive constituents have gathered outside her home with flowers and balloons while others stood outside her office with hand-made signs reading “We love Gladys” and “Long live Gladys”.

Ms Berejiklian’s leadership endured bushfires, drought and storms and she navigated COVID-19 but after four-and-a-half years in the top job, she couldn’t beat the ICAC.

The anti-corruption watchdog says it is investigating whether she “exercised public functions” in a position of conflict, given her secret five-year relationship with ex-MP Daryl Maguire which was revealed at its hearings in late 2020.

Mr Maguire is accused of abusing his public office between 2012 and 2018.

A teary and at times angry Ms Berejiklian said on Friday she had “no option” other than to resign, as she could not temporarily step aside and resume her role after the investigation.

Her resignation “could not happen at a worse time,” she said, as the state prepared to leave months of COVID-enforced lockdowns in less than two weeks.

She continues to deny any wrongdoing.

NSW’s Rob Stokes: I’ll stick with Gladys’ plan to leave COVID behind if you make me leader