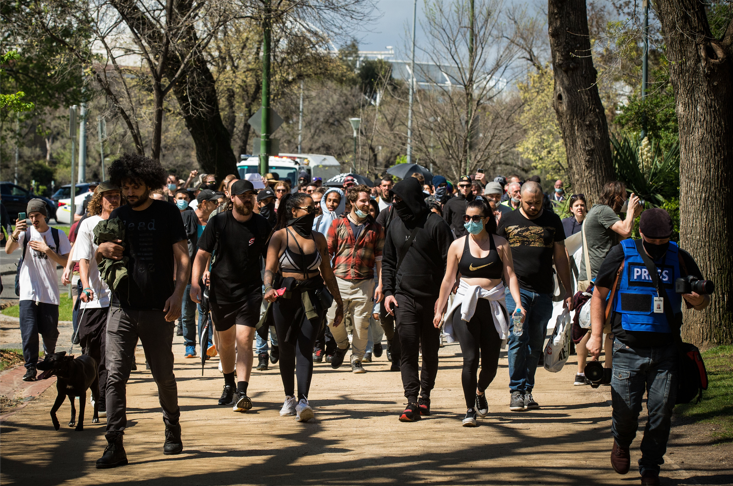 Summoned to the Botanical Gardens by coded text messages, protesters found the police were waiting for them. Photo: Getty

Protesters have again taken to the streets of Melbourne, a day after the state government announced a huge expansion of its mandatory no-jab/no-job COVID-19 vaccination demand.

Premier Daniel Andrews on Friday issued an ultimatum to hundreds of thousands of Victorians, many of them vaccination hesitant: get vaccinated for COVID-19 in the next fortnight or face losing your job.

Demonstrators gathered in Melbourne on Saturday to protest mandatory vaccinations and were again met by a heavy police presence.

As demonstrators chanted “My body, my choice”, officers were seen tackling protesters on the edges of the group and making arrests before the group dispersed.

Unlike previous demonstrations, the police did not use no pepper spray, no plastic bullets were fired into the crowd and the protest did respond with flying bottles and violence.

Victoria recorded 1488 new cases of coronavirus in the 24 hours to Saturday morning, and two men aged in their 60s from Hume and the Mornington Peninsula have died.

It comes as state Treasurer Tim Pallas announced $196.6 million in cash grants for 70,000 businesses in Melbourne, Geelong and Mitchell, impacted by the construction shutdown from September 21 to October 4.

The industry has been closed for two weeks due to concern over rising case numbers, transmission and poor compliance at building sites, but it will reopen on Tuesday to workers vaccinated with at least one dose.

Mr Pallas was critical of the federal government while making the announcement, saying “these grants would have been doubled if the Commonwealth had not refused to contribute to the Victorian construction industry”.

“It is beyond reason or comprehension why this industry, which will struggle, of course, as a consequence of the challenges that they’ve had to confront over the last few weeks, are not getting the support that they would otherwise expect,” he said.

“At every step of the way throughout this pandemic, NSW has received a free kick from the Prime Minister for Sydney,” Mr Pallas said.

Meanwhile, there are 429 people currently in Victorian hospitals with COVID-19, a rise of 34 on Friday, with 97 people in ICU and 54 requiring a ventilator.

More than 70,000 Victorians were tested for the virus in the 24 hours to Saturday, and 36,878 vaccinations were administered.

There were 71 new cases reported in regional Victoria, as Shepparton and Moorabool begin their first day under week-long lockdowns to contain growing cases in those areas.

Shepparton’s active cases grew by 10 to 34 on Saturday, while Moorabool recorded another two cases bringing its total to 32.