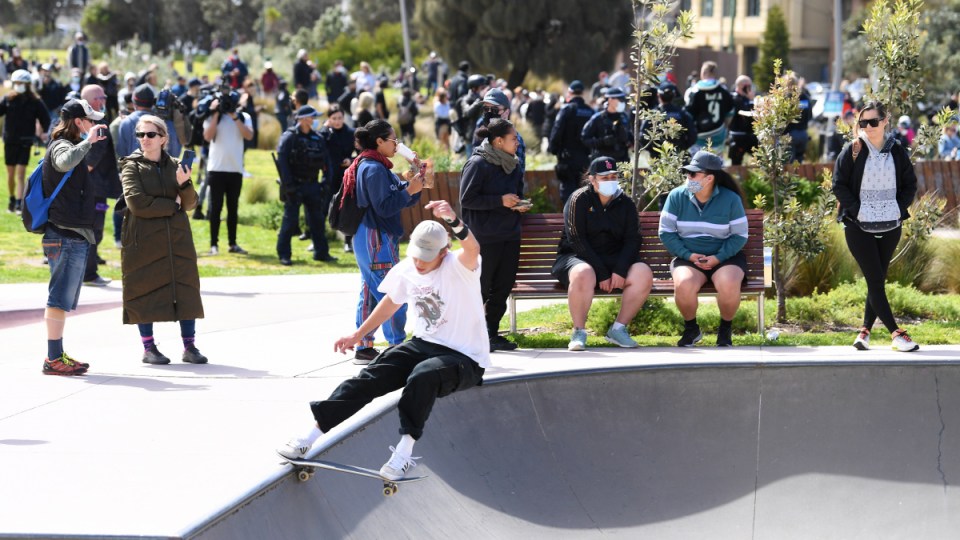 Police ended a sixth day of anti-lockdown and anti-vaccine protests in Melbourne on Saturday, dispersing and arresting would-be demonstrators on the city’s St Kilda Beach.

Hundreds of police lined the popular beach after protesters initially gathered at nearby Luna Park.

Police arrested a total of 94 people through the day, mostly in St Kilda and in the Melbourne CBD, before the protests ended mid-afternoon.

“All those arrested will be issued with penalty notices for breaching the CHO directions,” a Victoria Police spokeswoman said.

The beach unrest followed seaside disturbances of a different kind in Sydney on Friday night when large crowds gathered at Bondi and Manly to make the most of the warm spring weather.

Police issued three fines for public health order breaches and a number of a move-on directions as they dispersed revellers.

But there should be good news for some beachgoers Sunday, with Victoria’s Surf Coast set to exit lockdown.

The coastal city of Geelong will learn its lockdown fate on Sunday as rising COVID-19 cases and hospitalisations threaten a suspend elective surgeries.

Health Minister Martin Foley has confirmed restrictions will ease on the state’s Surf Coast from midnight , while Greater Geelong and Mitchell Shire remain under review.

All three regions were plunged into lockdown a week ago after positive coronavirus cases emerged.

Mr Foley said the outlook for Greater Geelong is “relatively positive”, but Mitchell Shire – which recorded seven new cases on Saturday – is likely to remain locked down.

Victoria recorded 847 new locally acquired COVID-19 cases across the state – its highest daily tally – and another death on Saturday.

COVID-19 hospital patients have jumped by 55 per cent over the past week and 124 per cent across the past fortnight.

“Elective surgery, particularly non-urgent election surgery, is clearly on the table to pause and to delay,” he said.

Meanwhile, after police snuffed out a sixth day of protests in Melbourne, organisers on an encrypted messaging platform have made vague plans for more on Sunday.

The number of people to be fully interviewed by contact tracers within a day of their positive result nearly doubled last week, data published by NSW Health reveals.

The week before, tracers only reached 31 per cent of people within that time frame. It is the first time that metric has surpassed 50 per cent since the end of August.

The improvement in contact tracing comes as the number of new local cases continues to dip.

The number of people infected on average by each positive case in that week – known as the average growth factor – dipped to 0.98, falling below one for the first time since the current outbreak began in mid-June.

Every daily tally of case numbers reported this week has been lower than last week’s lowest number, 1083.

There were 1007 new cases reported on Saturday.

But while cases are gradually falling, the number of deaths remains fairly consistent.

Eleven more were announced on Saturday, the same number as the previous day.

Of the 22 deaths announced on Friday and Saturday, five died at home and only tested positive to the virus after passing away.

More than half the new cases reported on Saturday were in the coronavirus hotspots of western and southwest Sydney.

But authorities are also concerned about growing case numbers in the Illawarra, which saw 70 new cases in the 24 hours to 8pm on Friday.

Systematic testing is under way after two patients in a shared room returned positives for COVID-19 at Canberra Hospital.

“It has occurred more than 20 times in our healthcare facilities and we are prepared for it,” he told reporters on Saturday.

However, it wasn’t known for how long the patients had been infectious and contact tracers were also endeavouring to find anyone outside the hospital who may have visited or interacted with them.

Both patients have been moved to a designated COVID ward since being diagnosed on Friday.

The ACT added an additional 32 locally acquired infections to its caseload on Saturday, the number equalling the largest daily increase since its latest outbreak began.

At least two dozen of the cases were infectious while circulating in the community, while seven were in quarantine. Twenty-six were linked to previous cases.

As of Saturday, the territory had 233 active cases with 492 patients having recovered. Ten remained in Canberra hospitals, four of them in intensive care and three requiring ventilation.

Authorities said more than 2600 tests were conducted in the 24 hours to Friday evening, while almost 85 per cent of ACT residents had received a first vaccine dose and 58 per cent had been administered with two shots.

July movie guide: Hallelujah! Leonard Cohen doco, Thor and Where the Crawdads Sing
The Stats Guy: The importance of data and knowing what to do with it
Today's Stories