Singapore is set to wind back some freedoms, despite having 80 per cent double dose vaccination coverage, to halt a surge in infections, reduce pressure on the healthcare system and avoid a lockdown.

As Australia inches towards a future living with Delta, Singapore is reimposing some restrictions for a month including limiting social gatherings to two people and making working from home the default.

The mostly mild daily cases are expected to surge from 1600 currently to around 6000 which could overburden hospitals.

“This was a very difficult decision for us as we know that this would affect many businesses and people,” said Trade Minister Gan Kim Yong, one of co-chairs of virus taskforce.

“While doing so may not reduce the number of daily new infections immediately, it will allow us to slow down the speed of increase and avoid overtaxing our healthcare workers.”

Finance Minister Lawrence Wong warned that the measures were needed as hospitals “are seeing tremendous strains”.

It comes as the NSW premier Gladys Berejiklian urged people not to think of the state’s 70 per cent double dose target, expected around October 11, as ‘Freedom Day’, saying citizens must still behave responsibly.

The state is also grappling with the challenging question of when unvaccinated people will be able to take part in reopened society.

NSW Treasurer Dominic Perrottet has said he did not want a “two-tiered society” in NSW.

“Once every single person in this state has had the opportunity be vaccinated with two doses then we should open up for everyone,” Mr Perrottet told Sydney radio 2GB on Friday afternoon.

The ACT is on track to become the first jurisdiction to reach 60 per cent of its residents over 16 being fully vaccinated against COVID.

Meanwhile Victoria has missed its first 80 per cent single dose target on the roadmap to reopening which it expects to achieve mid to late next week instead of Sunday as initially forecast.

The state is 3.7 per cent shy of reaching 80 per cent first dose vaccination coverage and Victorians are encouraged to head out for their vaccinations this weekend.

“These projections bounce around based on all sorts of measures. Let’s all redouble our efforts over this weekend,” said Health Minister Martin Foley.

The extra freedoms once the state hits 80 per cent single dose include resuming contactless sport for up to five fully vaccinated adults and travelling 15km instead of 10km.

Meanwhile protesters took the streets in Melbourne for a fifth day on Friday and police issued 215 fines.

On Friday afternoon officers and riot squad members descended on Northcote, dispersing a crowd of up to 80 protesters and making 31 arrests.

Chief Health Officer Professor Brett Sutton said it would take a couple of weeks to learn whether the protest was a super-spreading event.

The protests initially began on Monday in opposition to mandatory COVID-19 vaccinations for the construction sector and the closure of building site tea rooms, but have morphed into a wider anti-lockdown and anti-vaccine movement.

“Let’s not pretend these are rational individuals — they are absolutely whacky,” said Professor Sutton. 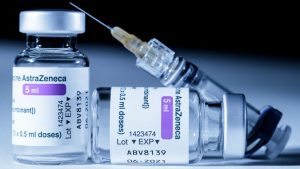 Australia’s death rate from the AstraZeneca vaccine is much lower than other countries because people are watching out for symptoms and getting early treatment, says the head of the Therapeutic Goods Association (TGA).

Adjunct Professor John Skerritt told the ABC initially it was thought about 25 per cent of people who developed the blood clotting disorder would die.

But in Australia that fatality rate was much lower at 5.6 per cent, he said.

Prof Skerritt attributed the improved survival rate to people being able to recognise the symptoms because of the large amount of attention the potentially fatal condition received.

“So they go and see their doctor in hospital early if, say, they have a really bad headache after AstraZeneca and all those things have really contributed to the fatality rate in Australia being one-third of what it is in the UK,” he said.