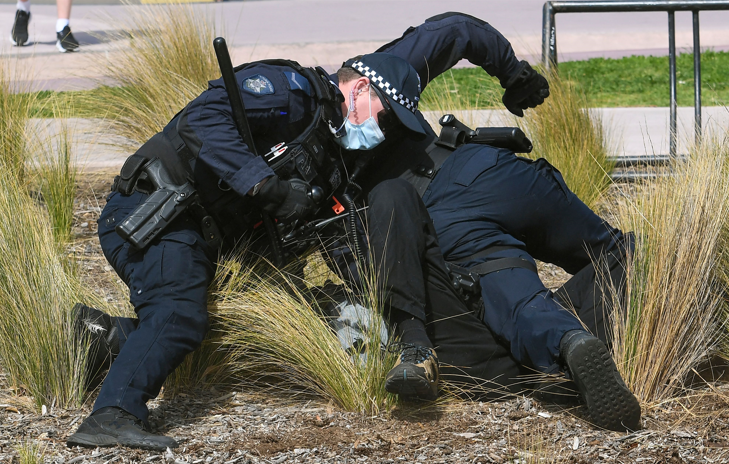 Police have snuffed out a sixth day of anti-lockdown and anti-vaccine protests in Melbourne, dispersing and arresting would-be demonstrators.

There were 94 people arrested across the day, with most in St Kilda and in the Melbourne CBD.

“All those arrested will be issued with penalty notices for breaching the CHO directions,” a Victoria Police spokeswoman said.

Organisers urged their followers to “show no fear” and said anyone who received a fine from police would be reimbursed.

But the planned sixth day in a row of disruption did not take off.

“No groups gaining traction that we know of,” organisers posted on an encrypted messaging app at 1.45pm.

They signed off about 3pm with vague plans for more protests on Sunday.

Saturday’s events came after police and riot squad members descended on Northcote on Friday afternoon, dispersing a crowd of up to 80 protesters and making 31 arrests.

A scuffle took place outside Northcote Plaza and several of those involved were led away by police at nearby All Nations Park.

A man who attended Wednesday’s protest in central Melbourne that centred on the Shrine of Remembrance has since tested positive, and authorities fear it could become a super-spreading event.

He described them as “completely regrettable”, “unrepresentative” and “ill-advised” activities that would achieve the direct opposite of their aims.

“Protesting does not work against this virus,” Mr Foley told reporters.

“We’ve already seen a case turn positive from those protests and we presumably might well see more.

“Victoria Police are clearly on top of it. The best thing that those protesters can do is go home and organise to get vaccinated.”

Opposition CBD recovery spokesman David Southwick said he was pleased there had been no repeat of the large-scale protests on the West Gate Freeway and shrine.

“I can’t imagine what people overseas are thinking about us now.”

The protests began on Monday in opposition to mandatory vaccinations for the construction sector and the closure of building site tea rooms but have morphed into a wider anti-lockdown and anti-vaccine movement.

Kirstie Clements: How to save money on fashion and still look great
Be patient, minister tells stranded Queenslanders
Today's Stories