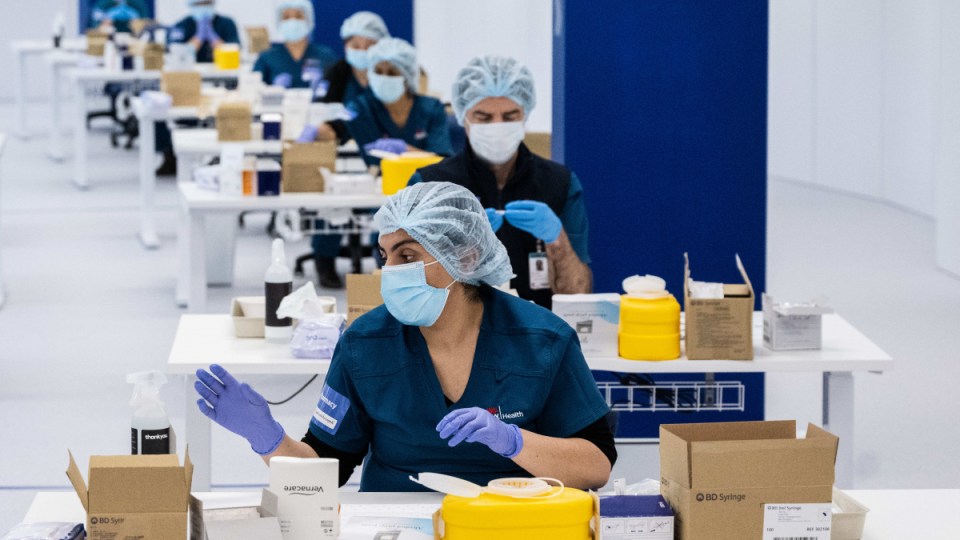 Rolling up your sleeve enters you in the million-dollar COVID jackpot. Photo: Getty

Australia has reached a long-awaited milestone, with at least half of the population aged 16 and over fully vaccinated against COVID-19.

“Many thanks to the record 347,796 Australians who came forward to be vaccinated yesterday,” Mr Hunt tweeted on Friday.

While Australia’s immunisation program has been slower than almost everywhere in the developed world, vaccination uptake has recently gained momentum.

The nation edges closer to 70 and 80 per cent over-16 double-dose vaccination coverage, which is crucial to easing restrictions.

Almost 75 per cent of the eligible population have received a first shot.

But some local government areas are doing better than others.

While Queenscliffe in Victoria, south-west of Melbourne, reached 80 per cent double-dose earlier this month.

Other LGAs have seen less than a third of their populations receive two jabs.

Outbreaks in NSW and Victoria continue to rage with more than 1700 new cases in Australia’s most populous states on Friday.

A man who attended Wednesday’s anti-lockdown protest in Melbourne is being treated for coronavirus in hospital.

There were 1043 infections in NSW and 11 deaths, while Victoria reported 733 cases and another fatality.

NSW Premier Gladys Berejiklian urged people not to call the first step of easing restrictions at 70 per cent vaccination coverage “Freedom Day”, expected to be reached next month.

“I’m always wary of using terms like Freedom Day because when we start to open up it must be step-by-step, it has to be done cautiously,” Ms Berejiklian said Friday.

“We want to protect lives and ensure that those who are vulnerable have every chance to be protected as well.”

Elsewhere, the Queensland government has come under fire for refusing to lock in a date reopening its border to coronavirus-hit NSW and Victoria.

Despite 3145 people being on the waiting list to enter the state, there has been no indication of when that will be permitted.

Some Queenslanders have vowed to take to the streets to protest against any measures to open the borders too quickly.

NSW – with 56.6 per cent fully vaccinated – is on track to reach the nationally agreed targets ahead of COVID-free states like Queensland and Western Australia.

Victoria and South Australia are almost at 46 per cent, while Queensland and WA are both on 43.4 per cent.

The nation’s capital leads the nation with 58.7 per cent double-dose coverage, though the ACT remains in lockdown.

Tasmania has hit 54.5 per cent, while the NT population is at 49.3 per cent fully vaccinated.

“It’s a worry,” he told the Nine Network.

“It’s not in control and it’s a real lesson to everyone else not to criticise but to say this Delta can get out of control.”

Professor Booy said there would be no “freedom day” when vaccine thresholds were reached with continued health measures including testing, contract tracing, masks and vaccine passports.

He expects the step from 70 to 80 per cent vaccination rates to take between seven and 10 days.

Nick Kyrgios at Wimbledon: Can he win it? Yes, he can
Qld Deputy Premier accuses PM’s office ‘backgrounding’ against NRL giveaway
Today's Stories